Images from a few 2013 stand-outs: A Sign Of The Times, Dirty Rotten Scoundrels, All My Sons, Hamlet, Empire: Terror On The High Seas, Hay Fever, Bodytorque.Technique, Waiting For Godot.

This is a wrap up of special moments since the commencement of Suzy Goes See in April 2013. A personal selection from over 100 productions seen in Sydney. Thank you to artists, companies, publicists and punters who have supported Suzy Goes See in 2013. I cannot wait for more shenanigans with you in the new year!

♥ Avant Garde Angels
The bravest and most creative experimental works in 2013.

♥ Quirky Questers
The most unusual and colourful characters to appear on our stages in 2013.

♥ Darlings Of Dance
Breathtaking brilliance in the dance space of 2013.

♥ Musical Marvels
Outstanding performers in cabaret and musicals in 2013.

♥ Champs Of Comedy
The cleverest, sharpest, and funniest performances of 2013.

♥ Daredevils Of Drama
Bold and excellent acting in dramatic roles in 2013.

♥ Wise With Words
The most interesting and intelligent scripts of 2013.

♥ Directorial Dominance
The most impressive work in direction for 2013.

♥ Suzy’s Special Soft Spot
For an exceptional work I saw in Melbourne. 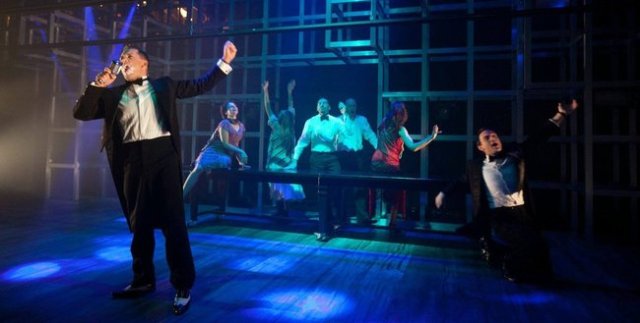 Theatre review
Atomic is a musical about two things; the invention of the atomic bomb that destroyed Hiroshima in 1945, and Leo Szilard, the man who was chiefly responsible for the science behind it. It is admirable that the writers had afforded a substantial portion of the show to historical aspects of the story, but the nature of musicals always seems to favour less solemn content, even if they are highly emotional. It is hard to make a dignified musical work, but the efforts here are laudable. One is reminded of Miss Saigon and Madame Butterfly, where war provides the backdrop, but personal devastation is given the spotlight. The result is a stronger, and more effectively emotional experience, but those sentiments are clearly not of the best taste. Atomic would perhaps be a more conventionally engaging musical if it dwells more heavily on Szilard’s personal predicaments and crises, but it is understandable that the show chooses to adopt a more refined approach to its storytelling.

On the technical front, Michael Waters’ sound design is most accomplished. NIDA’s Parade Playhouse’s acoustic potentials are exploited thoroughly, and the venue proves itself to be an outstanding option for more intimate stagings of musicals. There are some issues with lighting and set, but they are a result of being over-ambitious rather than negligence.

The strongest element in this production is the quality of its performers, who each have their moments of undeniable brilliance. Leading man Michael Falzon invests a great deal of psychological authenticity into his characterisation, and puts on a subtle yet strong portrayal of Szilard. Falzon’s success at transforming an unassuming scientist into a musical protagonist without the use of stage cliches is impressive and remarkable. He also happens to be the performer who executes the show’s choreography most effectively. David Whitney plays Enrico Fermi, the show’s only flamboyant character, and stands out appropriately with a joyful and effervescent performance. Christy Sullivan plays a wide range of ensemble characters, consistently delighting with conviction and a natural charm. It must be said that all performers sing their parts beautifully, and this is an Australian cast to be very proud of.

What is your favourite swear word?
Bollocks. I know, it’s British, but I laughed so hard the first time I heard it (from my sister who brought it back from her UK trip many moons ago).

What are you wearing?
Jeans and jumper because it’s cold today. Well, cold for spring.

What is love?
Necessary, unique and the only thing that really matters.

What was the last show you saw, and how many stars do you give it?
The Floating World. 4 stars. The cast were something else.

Is your new show going to be any good?
Ummm – YES! Have you not heard who’s in it? Who wrote it (book and script)? Lyrics? Who composed it, directed it, designed the set, lit the stage, designed the sound? Who’s designing costumes? Choreography? Who the musical director is? The musicians? Oh- and there’s a puppet!

What is your favourite swear word?
Fuckwit. We apparently made that one up here in Australia. We’re good at that.

What are you wearing?
Right now? My robe… I like to be comfortable at home. You’re lucky I even have that much on.

What is love?
Many things – EVERYTHING! Too many clichés could be mentioned here and it means different things to us all. In a nutshell, to me, love is sharing and honesty. And halva (look it up).

What was the last show you saw, and how many stars do you give it?
The last show I saw was Dirty Rotten Scoundrels here in Sydney – a solid 4-star show with a fantastic performances from all. A special mention though, Amy Lehpamer is amazing (my leading lady from Rock Of Ages).

Is your new show going to be any good?
The best question ever asked in an interview. Yes. Atomic is going to be excellent. An engaging story from an international creative team that has spent years getting it ready. We have a tremendous cast of talented Aussies supported by a kick-arse six-piece band… the songs definitely stay with you and are great fun to perform. Plus, I have put on weight and had my hair thinned out to play this role, so the show had better be amazing!