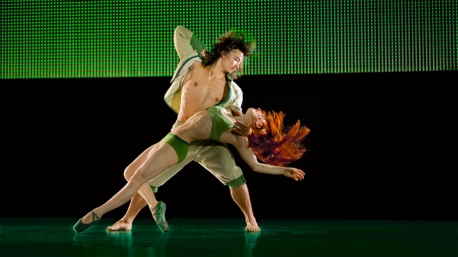 Theatre review
This re-construction of the classical Giselle delivers an incredible amount of punch and excitement, leaving its audience on a high as though it had witnessed an action movie in the flesh, rather than a work created from the deconstruction of ballet.

One could argue that the star of the show is composer Smiles, whose music overwhelms and guides the viewer through the hour long performance, providing logic and narrative to the dancers’ work. Less effective is the massive electronic screen, which spouts words throughout, supposedly complementing the choreography in some way, but is actually both ugly and distracting.

Stewart’s choreography is intriguing and captivating. The pace of the work is urgently energetic, but he also provides variety throughout to prevent any moments of monotony. The incessant procession of bodies only ever entering stage right, and their frequently breathtaking super-human feats make this a real spectacle of a performance, but in the end, the beauty of its dance still breaks through and touches. What remains is sublime.

Theatre review
This production relies heavily on the playwright’s words. Daly’s text is both challenging and clever, weaving together simultaneous layers of conflicting realities through just two players. They go through subtly transforming spaces and characters, while presenting what seems to be a static setting. One might argue that this creates a monotonous two hours, but the integrity of that claustrophobic cell-like environment is preserved.

This work’s post-modernist acknowledgement of audience is exciting. There is a thrilling and slightly sadistic enjoyment in its implication that the two men on-stage are being kept captive and slowly driven insane by the audience itself. Questions about the relationship between artists and society are thoughtfully considered through many beautiful, albeit sometimes cruel, analogies. Plays contemplating the nature of art in modern capitalistic societies and actors discussing acting can be tedious, but within the context of this story, the themes are refreshing and thought-provoking.

Theatre review
This work of nostalgia references British comedy in the 60s and 70s, utilising every familiar mechanism that contemporary audiences would know from Benny Hill, Are You Being Served, and the Carry On films. It cleverly incorporates an endless string of raucous gags, unafraid of the lowbrow but carefully avoiding anything that would be deemed “bad taste” by today’s standards, such as the homophobia and misogyny that had featured prominently in the past.

Hynter’s direction brings to Sydney a breath of fresh air, a kind of theatre less concerned with “high culture”, and more to do with pantomime and commedia dell’arte. Sydney Theatre at Walsh Bay felt like it had been administered a shot of adrenaline; not a minute passed without screams of laughter were hurled at the stage in joyful appreciation.

Theatre is serious business, one which comprises hundreds of different disciplines. Even in the realm of pure entertainment such as this production, One Man, Two Guvnors demonstrates what can be achieved when great skill and talent are applied perfectly.

Theatre review
From what can be deciphered, the story isn’t particularly interesting. The direction is uneven, with a couple of scenes coming across under-explored or possibly misunderstood. The leading actor, while earnest and intense in his performance, was essentially monotonous in his interpretation of his character and lines. All that said, the experience of a surrealist theatrical work must always be an unconventional one. Tackling this difficult text without a lot of smoke and mirrors (it’s a minuscule budget) requires a whole lot of commitment and passion, which this team has in abundance.

The manifestation on stage of a world in a constant nightmare state is particularly successful. A sense of dread permeates, while glimpses of comedy and sexual tension keep the plot moving along deliciously, most notably during scenes where the leading lady is in confrontation with her vociferously formidable male ensemble. Also remarkable, is the production’s soundscape, which is sensitively designed and pays good dividends at unexpected points, when the playwright’s words simply needed more.

Show review
The thing about stand up comedy shows is that they’re either terrific or they’re terrible. There is no middle-ground, the audience never leaves thinking, “that was fine”. These are tough gigs, where the performers are not allowed mediocrity, for the only way to achieve a “passing grade” is to bring the house down.

Gina Yashere’s performance at this year’s Sydney Comedy Festival was convincingly masterful. Though her material is sometimes silly and usually apolitical, her delivery is consistently timed to bombastic perfection. Every consonant is mapped out for attack at every precise moment, and every pause is placed just so. Everything is informed by instinct and talent.

At this year’s festival, Yashere was not only given the biggest space at the Factory, but also the attendance of a truly adoring following. She was the commander of a ship full of passengers keen to venture on an hour-long journey, all poised and ready for wherever she may want to go. The lethal combination of a confident comedian at the top of her game and a totally up-for-it crowd, gave birth to an uproarious and thrillingly hilarious night. See you next year, Gina!