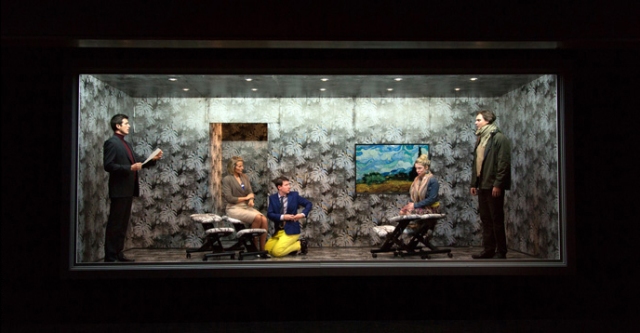 Theatre review
There are certain kinds of comedy that only appear in the theatre. They require an intimate space, and the immediacy of a live audience. Television and cinema do not generally provide the same experience, and in Australia especially, dark humour resides away from mainstream media, which continues to proliferate its benignity in service of financial voracity.

Delectable Shelter brings absurdity, big laughs and excellent entertainment to the stage, with outrageous “adult concepts”, gleeful “shock tactics”, and the most thorough use of irony imaginable. With the possible exception of one moment where two characters are locked in embrace, the play is filled with so much humour and social criticism that no space is left for sentimentality and romance. This prevents the show from appealing to wider audiences, but here is a unique and dynamic production that features wonderfully skilful  work from writer and director Benedict Hardie, who obviously isn’t concerned with catering to the masses. His Molieresque attacks on religion and the bourgeoisie are delivered with considerable wit in the form of imaginative, incisive commentary that cut with depth and precision.

Hardie’s cast is a formidable one. Not only are they required to work with quite extreme comic material, they mark out scene changes by performing four 1980s ballads in the style of classical Bach chorales, complete with hymnal harmonies. Simone Page Jones has an outstanding singing voice and the face of an angel but surprises with her eagerness at tackling the wackiest characters, like the body-builder who attempts to provide therapy to agoraphobics, and a religious leader of the Albatross cult who exhibits the most outstanding features of today’s religious leaders. Yesse Spence is painfully delicious as Biddy, a stereotype of the uptight upper-middle class white woman who will cross her legs at all costs, but needs to be reminded to breathe. Jolyon James impresses with his comic timing and range, creating innumerable colourful characters, all distinct and all hilarious.

This is a truly funny show propelled by some very talented people and an anarchic spirit. It anthropologises aspects of modern Australian life without providing a direct political statement, although it might be construed that laughter (and a reminder to breathe) is the best medicine for the predicament that we are only now starting to realise that we are in.