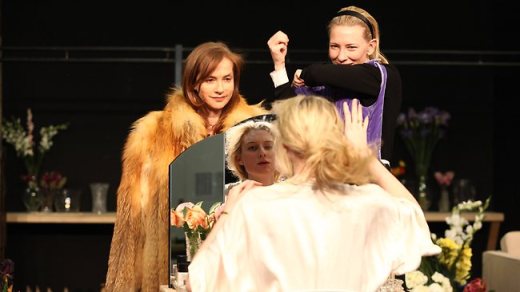 Theatre review
It’s difficult to find Genet’s script relevant in Australia today, as the concept of “domestic help” is far removed from our day-to-day realities. Of course, the employee/employer relationship is commonplace, but our experience of it isn’t quite as oppressive and stifling an environment as portrayed in the play. Therefore, it is form rather than content that is of interest in this production by the Sydney Theatre Company.

All three actors are charismatic, vibrant and thoughtful in their interpretations of the text. There are many macabrely humorous moments played with twisted aplomb by these fearless women, providing not just comic relief, but also a sense of gravity and doom while avoiding a monotonous heaviness that could have easily permeated throughout. A very large screen captures these enigmatic faces in tight close ups (with cameras in the wings), feeding the adoring audience with the star power they desire. This same medium however, is also often distracting and awkward. Our eyes are kept too busy, trying to keep up with too much action, and we quite literally lose the plot at several points.

The set design and lighting are sumptuous. Several costumes look like real couture pieces the script proclaims them to be, and they are truly mesmerising (one is said to be a McQueen). The seductive glamour and luxury of the visual design makes sense within the context of the decadent world in which they dwell. On the other hand, the choice and use of music does not work nearly as well, with inappropriate tunes jumping jarringly in at several points, as though someone had clicked the wrong button on an iPod.

Ultimately, this production is about performance, and the art of acting. Huppert’s less than perfect command of the English language is a minor fault, but witnessing the best in the world onstage tackle an outlandish and flamboyant text is not only satisfying, but thoroughly and wonderfully exhilarating.