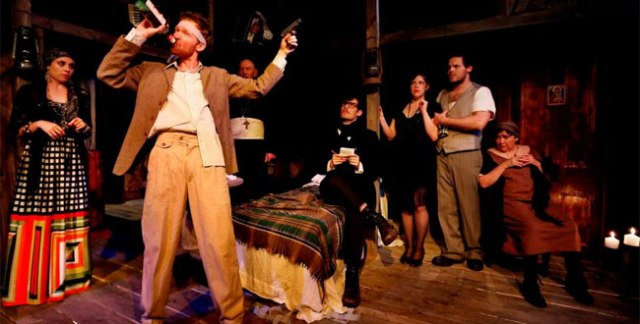 Theatre review
This story comes out of 1920s Russia, and includes some very subversive dark humour, dealing with death, marriage, religion and politics. Moira Buffini’s 2007 script is an adaptation that retains the original’s time and place, foregrounding the political climate of the time. Almost a hundred years on, Russia is no longer thought of in the same light, but social dynamics do not seem to change and we recognise the mechanics at work in the narrative.

Dying For It is a very funny show. While not every moment is laugh-out-loud hilarious, each line is witty and comedic. The context is dark and twisted, but the writing is purposefully light and humorous. Buffini’s characters are irresistibly amusing, and her farce cuts to the bone. Director Peter Talmacs creates a show that is entertaining and energetic, extracting from his cast a performance style that is wild and extravagant. Talmacs is relentless at keeping things lively, and he makes full use of the abundant absurdity inherent in the play.

The cast is a strong (and big) one, with leading man Johann Walraven taking the opportunity to show off his formidable talent. Walraven plays Semyon Semyonovich Podsekalnikov with a calculated silliness, and portrays a character that the audience finds simultaneously endearing and appalling. His work is precise, in terms of his physicality as well as diction, and is an absolute joy to watch. His wife Masha is played by Jodine Muir, who excels at the kind of frantic, rambunctious performance that characterises this production, and offers an important counterbalance of rationality to the mad goings-on of the other roles. Jeannie Gee’s mother-in-law character escapes generic stereotyping, with a depiction that is charming and whimsical. She clearly has a keen sense of comedy and draws many of the biggest laughs.

Tom Bannerman’s design shows a deep understanding of the New Theatre stage capabilities, and his ambitious set is crucial to the effectiveness of this production. Tony Youlden’s lighting is subtle but thorough, and operated flawlessly by the crew. This is a demanding show for its operating crew, who rise up to its challenge with fabulously sleek work.

Dying For It travels through bleakness, but its dark murmurs resonate silently. It expresses a poignancy that is omnipresent but gentle, even though its themes are heavy. This is a work of comedy that is reminiscent of the art that laughs in the face of adversity.