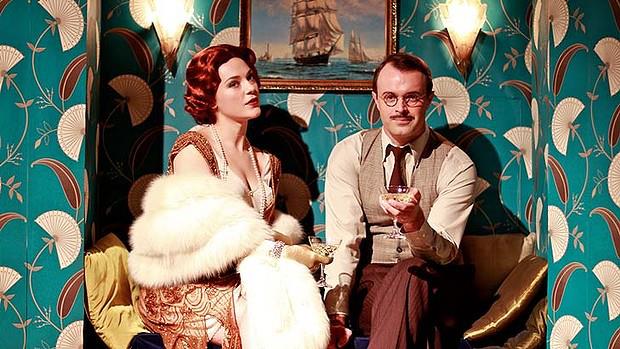 Theatre review
Empire: Terror On The High Seas is a murder mystery set on an ocean liner in the late 1920s, but it owes little to the world of Agatha Christie’s writing. Instead, Toby Schmitz’s script is evocative of improvisational jazz music and the work of William S. Burroughs, with a structure that lends itself to a plot that unfolds mesmerisingly, but also freely goes away on lyrical tangents as though the story takes a break to feed an opiate habit at suitable intervals.

This is a big cast, with the participation of just under 20 actors. Performances are consistently good, with even the smaller roles excelling at creating an impression. Leading man Anthony Gooley is spellbinding as an unorthodox writer of sorts, on a journey grappling with personal issues including his concept of setting poetry to the stage. Gooley skilfully creates an endearing character who surprises with dramatic turns that are deliciously outlandish. Nathan Lovejoy steals the first half of the show with an exquisite flamboyance. His stage presence is irrepressible and he rules the stage with perfect comic timing at the show’s lighter sections. Ella Scott Lynch’s creation of a wild, gutsy flapper provides some of the most entertaining moments, and her stage husband Anthony Gee is memorable with a high energy performance that is manic and menacingly intense.

Leland Kean’s direction is thorough and meticulous. His vision comes through distinctly from his players who obviously understand their captain’s destination and purposes. Kean does not shy away from shock value, but he is simultaneously elegant in his approach. There are explicit scenes of debauchery and murder but his show is an aesthetically stylish one. Costumes and set are cleverly and beautifully designed. Sound is outstanding by being omnipresent and crucial to the fluid machinations of the storytelling, but is never distracting.

This is an artistic work that takes many poetic licenses and while it does not always communicate clearly, it takes its audience on its trip and triumphantly weaves through styles and genres, ending up with a theatrical narrative that is gripping, fascinating, and utterly fabulous.