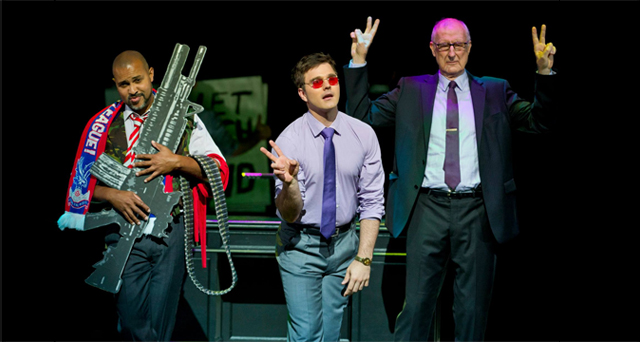 Theatre review
Biographies of fascinating people appeal to our inquisitive nature. We want to know how people tick, to discover reason behind behaviour, and to uncover secrets of the rich and famous. Rupert Murdoch is one of the world’s most well-known business people, with a personal and professional history that is documented ubiquitously in the public domain. David Williamson’s script is a chronological rehash of Murdoch’s many milestones, but does not provide analysis or insight that might offer a fresh perspective of the prominent figure. The plot reads like a Wikipedia entry, with one key event after another, none of which is surprising and everything is predictable.

Director Lee Lewis does an admirable job of creating a dynamic and colourful show from the plain script. The show feels like a Broadway musical with bells and whistles in every scene taking focus away from the lack of story and drama. Lewis does her best to add excitement with well paced and energetic sequences, but at over two hours, our attention struggles to stay interested in the deficient narrative. The production is designed successfully, with composer Kelly Ryall and lighting designer Niklas Pajanti both adding flair and inventiveness to the proceedings, and Stephen Curtis’ set and audio-visual elements giving the large performance space focus, shape and texture. Murdoch’s tabloid format takes to the stage, giving us cosmetic lavishness, and distraction from the real issues.

There are two Ruperts in the show. James Cromwell is presented as Murdoch as he is today (complete with Twitter account) telling us his side of the story like a narrator to the piece. Cromwell’s energy is oddly placid, but the actor’s sturdy presence helps him portray the allure of power and wealth convincingly. Guy Edmonds is outstanding as Murdoch in the flashbacks. He is astute, charming and sprightly, with a clarity that engages his audience, and a vibrancy that entertains. Edmonds does all the heavy lifting in the show, and his talent is a real highlight. Jane Turner’s comic abilities deliver a memorable, absurdist version of Margaret Thatcher, and Glenn Hazeldine impresses with a range of characters showcasing his amazing skills at mimicry and farcical exuberance.

So much of Rupert is strong and accomplished, but all the accoutrements in the world will not create a great story with a script as dry as this. All the interesting questions one might ask Murdoch in a personal encounter are not addressed. We leave not learning anything new, not understanding the man behind the madness, and completely unsatisfied.