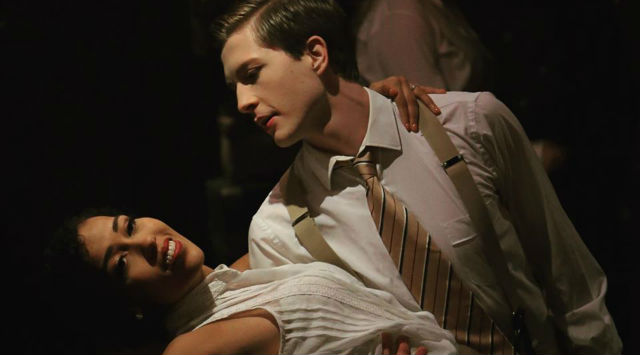 Theatre review
When first staged in 1920, La Ronde by Arthur Schnitzler remained a scandalous work even though it had taken 23 years to go from initial publication to a theatre in Vienna. It dared to depict progressive sexuality as somewhat natural, and certainly spoke about promiscuity as as a phenomenon far less reprehensible than was the convention. A century later, there is little left in the work that feels even naughty, thankfully as a result of substantial advancements over time, in attitudes about sex.

Michael John LaChiusa’s Hello Again is a 1993 reiteration that transforms the ten dialogues from Schnitlzer’s original, into songs for the musical format. LaChiusa’s music is often experimental and infrequently melodic, with lyrics that now seem unsophisticated and lacking in wit. Each chapter takes us through the decades of the twentieth century, but direction by Jerome Studdy never makes that at all clear. The production feels rough around the edges, admittedly clumsy at points, but an enthusiastic cast almost holds everything together. Without microphones, the acoustically challenged auditorium proves demanding of those with smaller voices, but it must be said that the ambition of all involved is admirable.

La Ronde is about class as much as it is about sex. It represents an effort to look at humans at our most vulnerable and essential, stripped of all ornamentation and pretence, trying to understand ourselves at what should be our purest. Using sex as a common unifying mechanism, and hypocrisy as a theme through which we can access notions of manufactured identity, Schnitzler urges us to be honest, in the belief that truth will set us free.