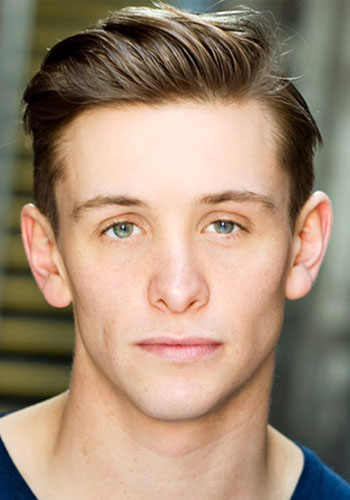 Hoa Xuande: Before you read Tonsils And Tweezers, going purely from the name, what did you think the play would be about?
Travis Jeffery: I had absolutely no idea what the play was about before I read it. I love the title, but the only thing it gives away is two of the characters names, and even that’s not crystal clear. Will O’Mahony is a very intelligent human and writer so I gathered the title wasn’t going to be literal, but the thought did cross my mind that ‘hey maybe it’s just set at the dentist’.

What kind of kid were you at school?
I was the funny chubby kid at school. Or at least I tried to be funny, I was definitely chubby. My passport photo was taken in 2009 when I was around 107 kgs, these days when I whip it out at the airport I occasionally get laughed at… at least I’m getting laughs 😦

What are the similarities or differences between you and your character?
The importance of friendship is definitely something myself and Tonsils have in common. My friendships are one of the most important parts of my life, whether it’s on or off stage it’s wonderful knowing you have people that will be there for you, including you, Hoa Xuande. At the heart of Tonsils And Tweezers is two best friends trying to help each other work through something traumatic, it’s their friendship that drives the play.

What do you think your character’s name actually is and why?
Interesting question Hoa, lets go with Peter. Purely because in one of the rehearsals James Sweeny, who plays Max, called me Peter when he wasn’t cut off in time. Or maybe his name really is just Tonsils, like Cher!

Where do you go to get your dance moves?
I learnt my moves at the school of hard knocks! Don’t be fooled into thinking I woke up one morning and they were there. Years of hard work and dedication has been put into my skills. Hitting the D-Floor rain, hail or shine to keep my moves in peak condition. Actually to be honest I was born with absolutely no rhythm so dancing is incredibly hard for me, come watch the show and see for your self.

Travis Jeffery: What do you enjoy about Tonsils And Tweezers and Will O’Mahony’s writing?
Hoa Xuande: I’ve had the chance to work with Will twice now on his plays, including the original development of Tonsils And Tweezers, and the thing that really sticks with me about his writing is how frivolous and fun his plays are until it drops you into the deep end and puts you into an emotional mess. Without trying to sound smart he creates these ideas and clues along the way, which ironically makes his plays really clever. In Tonsils And Tweezers we just get to be silly and play until we hand the audience the play’s actual intentions and emotional truth. It’s really fun to do that every night!

What’s the biggest difference between this production and the original?
The biggest difference between this production and the original would have to be the pace between the two shows. The original was put on as part of a double-bill of theatre at the Black Swan State Theatre Company in Perth so we had some time constraints so Will, who also directed the piece himself, really got us to rapid-fire the text. I mean, we really spoke quite fast! But this production has allowed me to just re-discover the text and give the play a little more ‘breathing room’ so it’s nice to be able to just take your time a bit more in this version of the production and make new choices that you hadn’t previously thought about before. It’s just been great to be able to do the same text again but in a different way!

This question has 2 parts! Part 1: What do you like most about rehearsals? Part 2: What do you like most about working with me?
Haha, well… early on in rehearsals, it was interesting to re-discover the play with Travis and Michael and because I had done the play before, I thought, “Nah, I’ll be right.” But as they kept mining the text and discovered things I had completely missed before, I found myself questioning what I actually knew and what my choices were in the previous production and whether I had even understood the play in the first place. So stepping through the play once again in these rehearsals has actually been quite a refreshing feeling. Travis, mate, I like your can-do attitude! Strong choices even if they might be wrong, or always wrong, haha! Nah, actually that was me every day!

Is it true you only own one white shirt and wear it every day?
False, my friend, I actually own more than one white shirt. Three, to be precise. One of which is being used in the show right now! But I choose to wear my ‘rehearsal’ white shirt every day for rehearsal purposes. FYI, it does get washed every week, I think!

Did you ever have a nickname that you hated? Do you have one now?
I’ve had plenty of nicknames or more like mis-pronunciations of my name that’ve probably turned into a nickname at some point in time. The strangest reading of my name once was ‘hon’ and I was like, ‘Interesting, don’t know where the ‘n’ came from but I’ll take it!’ It’s pronounced ‘hwa’ by the way, like a karate chop! That phrase has become attached to my name every time I introduce myself now, haha! But no, never really hated any nicknames. Do I have one now? Don’t know, probably, but Xanadu’s been making the rounds because it looks similar to my last name!

Travis Jeffery and Hoa Xuande can be seen in Tonsils And Tweezers by Will O’Mahony.
Dates: 12 – 29 Jan, 2018
Venue: Kings Cross Theatre