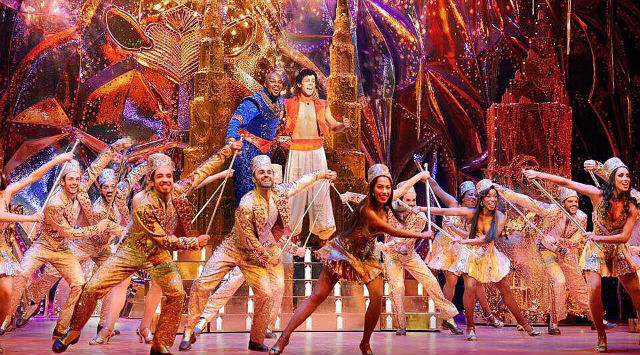 Theatre review
Based on their own 1992 film, Disney’s musical version of Aladdin is everything one could hope for in an adaptation of a much loved family classic. Fondly remembered for Robin Williams’ hilarious interpretation of Genie, and the chart-topping song “A Whole New World”, this theatrical rendering first appeared in 2011, and is now a well-oiled machine that delivers every bell and whistle expected of the format, including jaw-dropping state-of-the-art stagecraft, along with genuinely effective comedy, that provide sensational entertainment for young and old alike.

The show’s visual design is lavish and inexhaustibly dynamic. Costumes, sets and lights are a real treat, fascinating our senses at every moment like a kaleidoscope that constantly amazes. The manifestation of an actual magic carpet that literally flies around the stage is a gimmick that will captivate any viewer, including the very seasoned theatregoer.

Performances are strong, and the cast will likely grow in chemistry as the Australian season progresses. Michael James Scott’s work as Genie is particularly likeable. Although his energy levels do appear to falter after vigorous sequences, Scott impresses with charisma, sharp humour and a brilliant singing voice, making the larger than life character as commanding a presence as we wish for him to be. Ainsley Melham and Arielle Jacobs are the extraordinarily attractive leads, both delightful in their respective roles, and perfectly charming as the saccharine lovebirds.

It is an innocent romance that blossoms between Aladdin and Jasmine, but the show is a sophisticated one with its naive conceits kept in check. The world is a dangerous place in Aladdin, and its people must access their sense of morality to make the right choices. Themes of slavery, feminism and poverty are only lightly touched upon, but they provide the story with a meaningful foundation on which it discusses the eternal struggle between good and evil. This Disney musical has all the froth and frivolity that fans spend their money on, but at its heart is an ancient folk tale from the legendary One Thousand And One Nights, where the human condition is scrutinised, to reach an understanding of how we are, on our very best days.