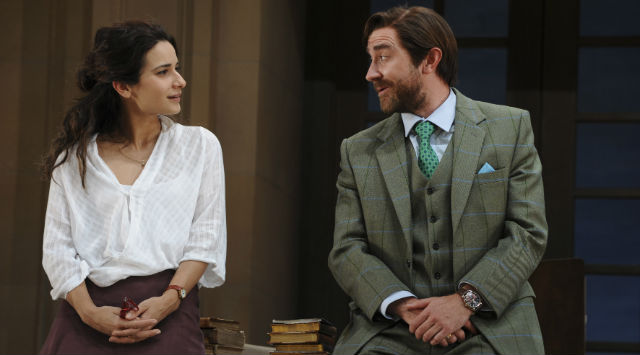 Theatre review
Strong societies encourage each of their individuals to reach the greatest of their potential. Geniuses do not exist in vacuums; even though the uniqueness of their abilities easily becomes a source of isolation or detachment, they are part of communities that need to recognise the exceptional advantages they bring to the progress of our civilisations. In theatre, a conundrum exists with writers like Tom Stoppard. To produce a play such as his Arcadia, a team of highly accomplished talents must be employed in order that the density of his writing gets the best chance of finding elucidation, but that would necessitate considerable box office takings (at a time when government funding for the arts continues to plummet). Bringing Arcadia to the masses is a strange proposition. We are used to mindless sentimental tosh drawing in the crowds, but getting throngs into the Sydney Opera House for a night of intense intellectual exchange is, to put it mildly, ambitious.

Many will appreciate director Richard Cottrell’s sophisticated and vibrant take on the text, but there will be no shortage of viewers finding themselves entirely befuddled for its three-hour duration. The play is about mathematics, chaos theory, the second law of thermodynamics and English landscape gardens in the early 19th century, quite a different set of interests from what we encounter in Australia’s everyday media. Perhaps this is an indication that the public is actually capable of ingesting more than sporting scandals and partisan politics, but more realistically, this is a case of either seriously overestimating our cultural climate, or a very daring effort at lifting our game.

Art must challenge, but when it does, it often alienates. Cottrell’s show is energetic and seductive. Its jaunty rhythm and charismatic personalities are engaging but whether they make Stoppard’s subject matter enticing, is debatable. We are impressed by the passion depicted on stage. Some audiences might be able to get involved with the idiosyncratic obsessions of Arcadia‘s characters, but more are likely to be swept along by the cast’s incontrovertible thespian devotion.

Key roles are marvellously performed with an infectious glee that for the most part, keep us within the action of the play. Andrea Demetriades is sensational as Hannah Jarvis, completely convincing and natural in her approach, and irresistibly compelling. What she presents is a model for the kind of acting that forbids the detection of any divergence between actor and character. Her conflation of the two seems effortless, yet there is no denying the theatricality that allows her to communicate intentions and emotions with brilliant clarity. Similarly delightful is Josh McConville as Bernard Nightingale, deliciously pompous and shrewdly sardonic, playing the role as an effective archetype but with a solid authenticity to keep us convinced and endeared.

Stoppard and his characters strive for a mastery of their domains. They locate and identify pieces to puzzles that will form a finished and satisfying picture to intellectual pursuits that inevitably become more complex as processes develop. Watching Arcadia asks of us that same commitment of attention and effort. It is not easy-going for the vast majority, but we can certainly jump back into the action whenever we find ourselves in moments of confusion, to continue on that chase for meaning. As a contender in the popularity contest that is the live theatre industry, this show is unlikely to be a crowd favourite, but as inhabitants of this city, we must hold deep gratitude that programming of this calibre exists, and is available to more than the privileged few.