Emily J Stewart: If you were lost in a labyrinth what would you do and why?
Claudia Barrie: If I was lost in THE Labyrinth I would have tea with the worm and his Missus, hang out with Sir Didymus and then dance with Jareth the Goblin King.

Destination you’ve not been to yet and why?
Japan. Desperate to go there. For the snow, food, culture. Everything.

How important was the casting of Time Stands Still?
Just as important as it is with any show. It’s not just about talent, chemistry and work ethic. It’s also about balancing personalities. Can I spend the next couple of months with this person? Luckily all of the cast (and crew) of TSS are a bunch of legends!

What has working in a non-conventional space been like?
Actually once we got past all the usual technical challenges, it’s been really freeing and as a result I think we’ve created a beautiful and very relaxed space.

If you weren’t doing what you are doing now what would you do?
Paint!

Claudia Barrie: If you could have 3 dinner party guests who would they be and why?
Emily J Stewart: Prince; greatest creative musical genius and inspiration. My dad; to check in on how he’s going up there and tell him about the show. Nelson Mandela; he maintained such dignity through heartbreaking circumstances. Incredibly humbling.

What has been the best part of the Time Stands Still journey so far?
Seeing something that I have been working on for almost 5 years come to life with such incredible people involved.

Name your greatest inspiration?
My dad; He was a jazz muso. Played and wrote sheet music for near on 12 instruments. Extremely passionate, taught me to follow anything I wanted to do, as long as I did it with everything I have.

How have you navigated the complexities of the script for Time Stands Still?
There are so many layers of the text. Each layer takes time to build. Gradually layer by layer I’ve pieced Sarah together and each night the layers and connection deepens.

Do you see a life for this show beyond the Tap?
It would be great to add greater production value to the show, in a bigger warehouse with larger audience capacity. 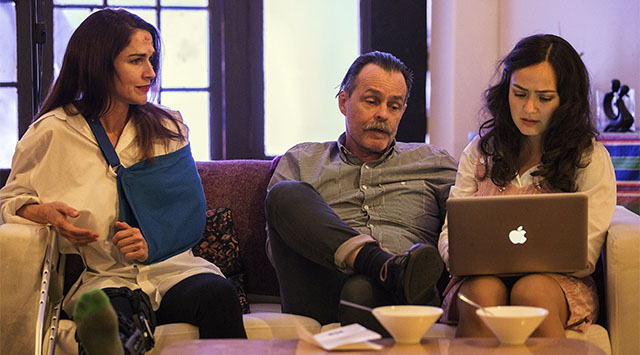 Theatre review
After sustaining serious injuries in Iraq, Sarah returns to Brooklyn, under the care of her partner James. For the first time, the independent woman turns reliant, and we watch the nature of their relationship go through a gradual but drastic change.

Donald Margulies’ Time Stands Still examines the meaning of modern living for some of the more fortunate people of our times. The action is situated in a New York apartment, where its inhabitants engage in degrees of introspection, never having to worry about money, food or shelter. The play oscillates between concerns that are admittedly frivolous, with international issues that are unquestionably serious. It discusses responsibilities of the world’s rich, as other parts of the globe engulf in flames and disaster, while simultaneously worrying about the dwindling relevance of marriage and monogamy.

The production places its audience quite literally inside Sarah and James’ home. The intimate setting exposes us to the frequently caustic energy that seethes between its characters, although a greater sense of polish for the set, would improve the story’s ability to focus on its concerns regarding class and privilege. Claudia Barrie’s direction is strong for the piece; we are constantly reminded of its deeper resonances even when people are squabbling over the pettier things in life.

Leading lady Emily J Stewart is full of conviction, and effective in providing a quality of heightened sentimentality to the show, although her Sarah seems too persistently vulnerable, with an overemphasis on her role’s fragility, that can interfere with the play’s celebration of female autonomy. Matt Minto is persuasive as James, the journalist determined to retreat from the rough business of war correspondence. The actor is beautifully nuanced in his portrayal of a man struggling to dominate his household. Supporting players Laura Dejanegara and Terry Serio are both delightful and dynamic, adding charming effervescence with every appearance.