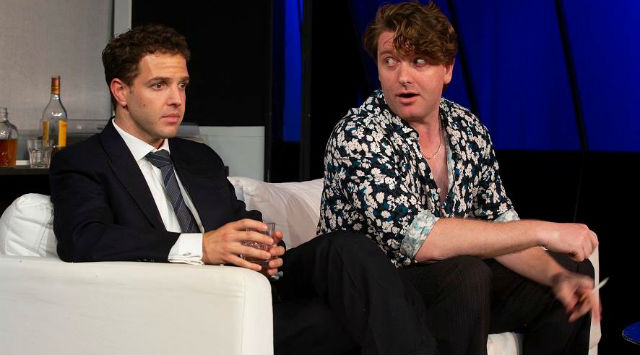 Theatre review
In Kevin Elyot’s My Night With Reg, we meet a group of London gays, in the throes of the 1980s AIDS crisis. Just as a new post-Stonewall liberation had begun to inform the way these men were able to live, a dark period of oppression again descends upon them, threatening to quash any promise of a bright future for the community. The play portrays the intimate world of traumatised individuals, all suffering from the reverberations of a then mysterious killer disease, whilst demonstrating the undying vibrancy of an irrepressibly spirited band of brothers.

It is a sentimental piece, oddly apolitical, with an authenticity that today represents not just an enjoyable sense of nostalgia, but also provides opportunity for a valuable historical study of a society not long past. Elyot’s jokes are as funny as they would have been at their 1994 premiere, but his sorrowful expressions are less resonant, with the advent of significant medical advancement, so many years after the fact.

An endearing cast presents a heartfelt production, directed by Alice Livingstone who orchestrates an entertaining 95-minute exploration into queer identities, from the perspective of middle-class white gay communities of the time. Some of the acting is lacking in precision, and sensitive moments deflate as a result, but the show delivers sufficient poignancy for it to be an ultimately satisfying experience. Comedic roles in My Night With Reg leave the strongest impressions, with Steve Corner’s outrageously lascivious turn as Benny particularly delightful, diligently balanced with some very surprising vulnerability that proves affecting. Also memorable is Steven Ljubovic, whose quintessential rendering of cabin crew Daniel, is unapologetically camp, complete with one-liners that are simply irresistible.

There certainly are more relevant queer stories to tell for 2019, but to forget those who had fought hard for today’s freedoms, would be unconscionable. From living underground to nuptial vows, the journey for LGBTQI rights was (and in many other places, remains to be) long and arduous. My Night With Reg does not explicitly show external forces of subjugation, but the limitations and compromises to how we had lived, are clear. Having emerged triumphant, it is important that we know to value and to take advantage of these new liberties, and to revisit tales of our past, for a reminder of today’s privilege, is key.