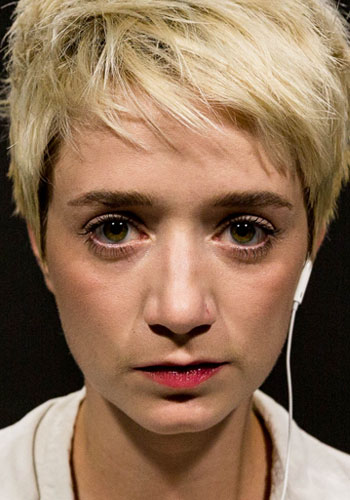 Tobias Manderson-Galvin: You’ve come all the way from Dresden, Germany (via L.A) to be in Puntila/Matti and I wonder as it is the structure of a classic joke: did anything funny happen to you on the way to the theatre? PS it doesn’t have to be funny haha.
Grace Lauer: I had a crazy experience/crazy apparition while driving. 10.30pm so it’s dark. I’m on a part of the autobahn that has no speed limit so I am going quite fast, there is nothing around, no infrastructure, nothing, just road and all of a sudden lit by my headlights I see these white legs in massive heels flash up on the side of the road really close to me like right there .. and then they are gone just as quickly. Or I passed. I’m not sure. I was so perplexed.. and creeped out somehow. A prostitute? The ghost of a prostitute, the legs of a ghost of a prostitute, my imagination? I drove even faster hoping it, they wouldn’t follow me, the ghost legs of the autobahn prostitute, yes that they wouldn’t follow me or it wouldn’t follow me, my imagination – yes that my imagination wouldn’t follow me, leaving it in the dust or better on the tarmac of the autobahn near the spot of the legs of the prostitute the autobahn legs. When I spoke to my brother he offered up the information that street prostitution is very illegal in Germany so neither she nor her legs should have been there really. I didn’t succeed. My imagination is right here with me.

Driving… you play Matti the chauffeur, in Puntila/Matti, so you, I didn’t know this but so you have a licence to drive?
Only a German one. I’ve only driven in Australia a couple of times, I don’t think I’m allowed to. Somehow I got pulled over one of these times and I was so nervous, and I gave him – the policeman – the German licence and he wanted to do the test- the alcohol test. I was giggling uncontrollably and he said ‘Have you been drinking m’am’; and I was really really nervous so I wasn’t blowing properly and then I said, ‘I think I ate an orange yesterday maybe it fermented in my stomach’. And then my mother – who was in Australia, she was in the passenger seat – said “it’s my daughter’s first breathalyser can we take a photo please,” I failed three more times to do the breathalyser test and my mother wouldn’t stop taking photos so the policeman let us go.

The ghost on the street is that the only ghost you’ve ever seen?
One other time. I was running a race in year four. And I got teamed up with a guy. And the guy- so the girl were running the race. And the guys were side lined supporting you as cheer squad. So I got teamed up with this guy I was MASSIVELY in love with. And I remember running and being in front but Deborah K. was running next to me and she was much taller and had longer legs than me and so like I recall running and then the gym teacher was like ‘come on guys support your girl’ and this guy was cheering so loud and I was like ‘I NEED TO WIN THIS’ and then it wasn’t like a prayer or something but in my head I was like ‘please please run faster’ and I just shot off and won this race by like metres and metres and so that was my first encounter with a ghost. Or even the ghost.

Did you win your sweetheart’s affection?
Not until years later and we went out for quite a while. We ‘dated’. I never told the boy about the ghost though and it didn’t last. The crazy thing and I was talking about this to some filmmakers in a sauna in LA. At least they said they were filmmakers. And also it seemed like everyone has their own radio station or podcast in L.A. So anyway they seemed to subscribe to this proto-Freudian, cult-like concept that everyone has an experience between the ages of like 5 to 8 years old that defines your whole life. For me it was winning that race.

But you became an actor not a runner. So how is this your defining moment?
It was a moment of realisation- no believing, let’s say, that there is this potential for a greater benevolent force. So I’m not sure I’m totally 100 percent comfortable with Matti killing Puntila at the end. We can give spoilers here right?

Grace Lauer: Have you ever seen ghosts?
You know we’re in Puntila/Matti, not Ghosts at Belvoir right?

I’m asking the questions. So have you?
Once I saw a dragon. I was visited by the Patron Saint of Telemarketing. I’ve communed with angels. I can travel my soul into other people’s bodies and control them like puppets. I can manifest balls of pure energy and all four elements. I can know anyone’s deepest desires by hearing only their cough. There is a spirit panther that follows me sometimes. But no I’ve never seen a ghost.

Speaking of Freud, have you ever seen a psychologist?
A psychiatrist/therapist actually; I went for 12 weeks. Each week she (the doctor) would say ‘I’m really sorry my office is being used by a colleague so we need to use this other room today I normally use for children. So we’d meet in this room full of stuffed toys. She said get comfortable so I arranged all the toys on the couch with me; with a fluffy anaconda around my neck as a scarf. She’d ask questions and sometimes the toys would answer. At the end of the twelve weeks I said to her: ‘So what’s wrong with me doc?’ She said nothing but I was very entertaining and she felt guilty that she’d been the one getting paid for the time. I never returned.

We had 14 walk outs on the second preview; does that bother you?
Once I did a show with an audience of 5. I didn’t like the attitude of three of them so I kicked them out. The show is not for everyone. Tolerance has its limits. I bumped into the three on the street later that night and they said ‘you’re the worst comedian we’ve ever seen’. I said ‘You didn’t see me.’ Turned out one of the two people that I left in the audience was a reviewer. Five stars.

There’s a fair bit of play between yourself and the audience that you didn’t tell me about in rehearsal. Does that happen when you go to other people’s shows?
Only if it feels appropriate. I once threw a show at punk hardcore luminary Henry Rollins’ spoken word concert (at Rollins himself), and he seemed pretty chill with it, but then beat me up in the carpark afterwards while his manager shouted ‘take a photo and post it on the internet, punk, no-one will ever believe you’. So I pick my battles now. But still- F*** you, Rollins.