Graeme McRae: Who’s your favourite character of the play and why?
Charmaine Bingwa: Alistair, the protagonist Paul’s father; though I’m being slightly biased as I play him. There is a simplicity to him that is so compelling. I love him as he is so representative of the generational disconnection that all too familiar in families. He also serves to remind no matter how hard we try to avoid being like our parents, elements of it are usually inescapable.

What is it like working with our director Anthony Skuse?
Firstly he is an amazing human being. He works very intuitively, has a sense of openness, yet implores exactitude and specificity as God in the detail. He is so widely read too, he’s pretty darn phenomenal.

You had a completely different career before pursuing acting. What caused this change?
I used to work in banking believe it or not! Living in Sydney, I had to balance my creative dreams with the expensive reality of this city. Slowly but surely I was guided towards acting, it almost felt like I could no longer hold my creativity in. I don’t regret it though, I learned loads and made heaps of friends! Plus, I am one of the few actors who is also a numbers girl!

If Skuse gave you a point in the show to come on and play a song on your electric guitar and sing, what would it be? I’ll do harmonies from the wings if you need.
“Paranoid Android” by Radiohead. It’s gloriously anthemic! I feel like Paul and Johnny would play Radiohead-esque music. I love how eclectic the song is, it feels like Alt Rock’s “Bohemian Rhapsody” and I think the lyrics “When I am King, you will be first against the wall” strikes at the heart of the play. Gratuitous solos and definitely room for your BV’s, Graeme!

Have you ever had an experience with a personality like Paul? If so, what happened? If not, make it up.
Unfortunately, yes. My ex was a narcissist and it was the pits. They can’t see beyond themselves, lack empathy and just take and take and take. My least favourite type of humans. But you can’t take it personally as their destructive personalities are usually just mirrors to their own internal brokenness. 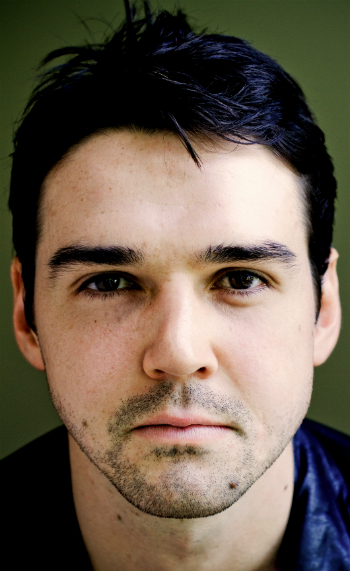 Charmaine Bingwa: This is the third Simon Stephens play you have worked on, what do you love about him as a writer?
Graeme McRae: It is! I love the way his plays open up as you work on them. A scene can seem pretty basic on first read because of the conversational quality of his writing but once pulled apart becomes profound. As a writer Stephens doesn’t spoon feed you, he makes you work. He asks you to find the clues in the text as to what is happening in the scene. I think this occurs because the writing is succinct, nothing is over written, the character never goes on & on about how they’re feeling. You’ll only get a fragment in what might seem a throw away line. As you can see, I’m not as succinct.

What is it like working with our director Anthony Skuse?
Skuse will always be a pleasure to work with. He has the ability to make the rehearsal room feel like home. His knowledge of art, in its many forms, is inspiring and can at times make you feel a little ignorant but is only used to allow you to see the work through a different lens. Ultimately you end up looking at a lot of art and watching a lot of art films. He’s the first to admit he doesn’t know what’s happening in a scene and so any thought or idea had in the room is allowed to be expressed and played with making the piece a true collaboration.

Birdland has many musical musings; what is your favourite song and why? And do you use music in relation to your acting craft?
I’ve been stuck on Hozier for a good while. He’s got a song called “It Will Come Back” that I think is lyrically spot on for the subject matter. I don’t think I consciously delve into other music when working on a project but it does happen. I remember working on Three Sisters last year and found myself listening to a lot of Tchaikovsky and for this it seems The Doors and Radiohead have been on constant loop in my car.

In many ways Birdland is a dissertation on money, fame and in the impact on people and society at large. What are your thoughts on that and how is it relevant today?
Ooooooo, good one. Feels like an essay question. I think the play does a great job at looking at both sides of the transaction. What happens when you start to believe in your own fame? Why do we as consumers want to own a part of a person’s life? Essentially money is just a number and fame is just a word and you need to be careful about how much you buy into any of it. Told you, far from succinct.

You play Paul, the ultimate rock god. Tell us the ways you are a rock god in your own life.
Ha! Thinking about how to answer this just makes me feel mediocre. The closest I get is busting out to Smooth 95.3 in my car. I know, I’m the coooooolest.