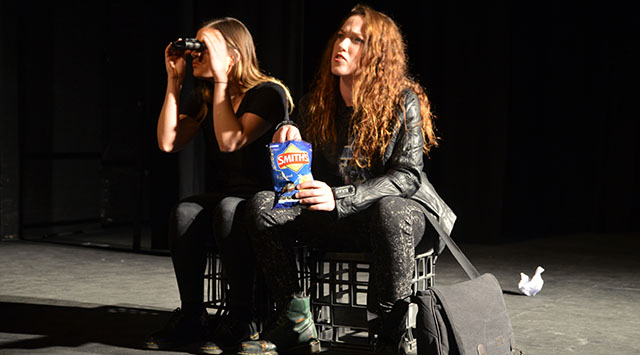 Theatre review
Only 2% of all television characters are lesbian or bisexual women, but they account for 10% of deaths. As the representation of gay women increases in our media, it seems that they are being killed off at an even higher rate. These are the alarming statistics we hear about in Natalie Krikowa’s All Our Lesbians Are Dead, a comedy that presents this wanton massacre on our TV sets, as conspiracy theory.

There are men in high places who understand that the inclusion of queer characters is advantageous to the bottom line, but are unwilling to accept the validity of queer lives. Lesbians are added to shows, to serve their purpose as profit-making commodities, but are routinely murdered to maintain the heteronormative status quo, established since the inception of television almost a century ago.

The plot involves a private investigator being hired by a couple of lesbian couch potatoes, to investigate the reasons behind these rampant TV deaths of queer women. There are scintillating data and intriguing hypotheses in Krikowa’s script, but dialogue is stilted, with unrealistic personalities constructing narratives that are rarely engaging. The cast exhibits good conviction, with actors Teneale Clifford and Gemma Scoble providing a level of proficiency that offer us moments of invigoration, in what is a very basic effort at making theatre.

Bianca says in the play, that it is better not to see yourself at all, than to see yourself dying over and over again. LGBTQI people should not have to choose between invisibility and destruction. Neither should we still be begging for legitimacy in the twenty-first century, but the truth is that our oppression persists. To see ourselves portrayed with fairness in mainstream media may or may not happen in this lifetime, but the alternative underground is where we have always thrived, and it is here that we find our voice and solidarity. Long may we reign.