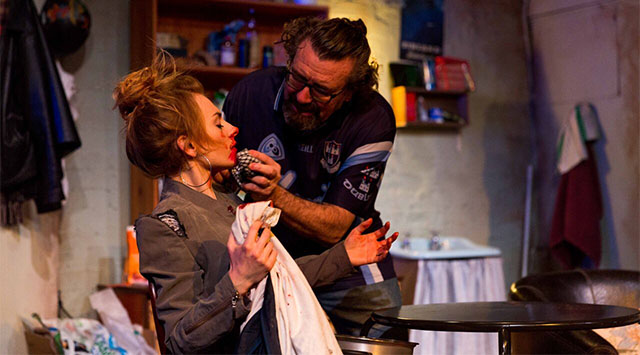 Theatre review
In a run-down home in Dublin, surrounded by insidious violence, its inhabitants go about their simple lives, acculturated and unperturbed. Conor McPherson’s The Night Alive begins with Aimee’s bloodied face, and we are struck by the astonishing ease at which everyone is able to recover from the savage episode. These are people who live rough, and we watch them get on with it, like most humans do, trying to figure things out in a world that always seems to be on the verge of turning dystopian.

Director Maeliosa Stafford brings to the stage, the quintessential Irishness of its characters, offering an intriguing glimpse into a culture that oscillates between familiar and exotic. Our Australian sensibilities at times run parallel, but can often seem divergent. With McPherson’s very fascinating dialogue, the other side of the planet is turned immediate, and even though the slow pace at which Stafford allows for things to happen can prove demanding, The Night Alive is a whimsical piece with definite charm.

Tommy is down on his luck, but John O’Hare’s naturalistic portrayal of a man who soldiers on, gives the show its tenacious optimism. Sarah Jane Kelly is spiritedly valiant, in her attempts at preventing the sole female in The Night Alive from dissolving into a subjugated accessory for the men’s stories. It must be said however, that romance blooms unconvincingly between the two.

Laurence Coy and Patrick Dickson are memorable in the play’s quirkier roles, both delightful presences with a sense of precision in their respective approaches. Kenneth is a slightly cliché bad guy type, but Darren Sabadina’s energy is refreshing, and a much needed boost for a production that tends to fall too languorous.

It may be hard out there, but we brave it. There are forces that work against Tommy and his friends, and not a day passes without its challenges, yet they remain hopeful. We can be certain that without hope, all our tomorrows may as well cease to exist. To live, we must keep on dreaming, for it is only in how we manufacture anticipation, that time can derive its meaning.