Theatre review
Pauline Hanson is one of our most famous politicians, a celebrity the media never seems to tire of, who is constantly in our airwaves with some variety of outrageous concoction. We are in an age where people are encouraged to behave poorly, so that they can be turned into clown-like characters, for our daily consumption of current affairs. There are consequences of course, to this morbid fascination and promotion of unsavoury types, but their ability to prevail within our cultural consciousness in undeniable.

The Colour Orange is a musical by Oli Cameron and Sophia Roberts, that tracks the rise and fall, and rise again of Hanson. Before the ubiquity of influencers and the twitterati, Hanson was a legitimate oddity. Cameron and Roberts are fascinated by the early years of her fame, spending much of their 60 minutes recalling what can only be described as an embarrassing portion of Australian political history. There is no questioning the colourful, and hence highly entertaining quality of those times, but little is made of our current climate and her persistent relevance to those who are so resolutely behind her.

The songs are thoroughly amusing, cleverly devised to deliver maximum comedic effect, although its satire seems to dwell most comfortably on the tried and tested. Hanson is presented as a walking cliché, and the audience laps it up. Although lacking in fresh perspectives, there is plenty to make fun of, and like its closing number says, “isn’t it fun to laugh,” repeatedly so it seems, at this bugbear that refuses to go away.

It is a raw production, but the talent on display is significant. The band, known as The Flaming Howards, is cohesive and effervescent, with Cameron as their spirited leader, bringing an appropriate amount of camp to proceedings. Six performers play a range of roles, all individually impressive, each one memorable in their own right. All players are given the opportunity to take on the lead role at different moments, but it is somewhat disappointing that none have taken up the challenge of impersonating Hanson’s very distinct speaking voice. There is however, enough derision already taking place, to keep us satisfied.

What Hanson represents, requires little decipherment; we have known her for over two decades, and her playbook never changes. The Colour Orange all but neglects the meanings of her resurgence, even though it is more than worthwhile to try and understand what it is in our community today, that allows that particular brand of hatred, prejudice and the thoughtless persecution of our own kind, to raise its ugly head. It has been demonstrated time and time again, that the presence of people like Hanson, feeds an insidious appetite for destruction, that when left unchecked, will not hesitate to precipitate one catastrophe after another. 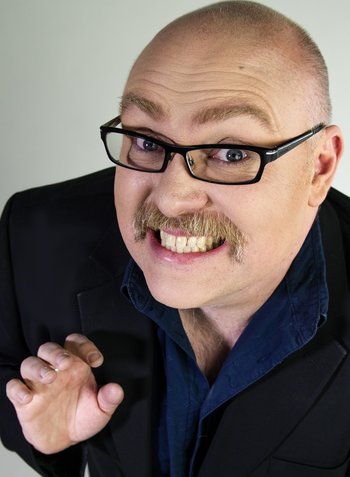 What is your favourite swear word?
Can’t.

What are you wearing?
Tracky daks.

What is love?
Haddaway! (I work on a music quiz show. I often just shout out artists and song titles).

What was the last show you saw, and how many stars do you give it?
Opera Australia’s production of Tchaikovsky’s Eugene Onegin in Melbourne. 4 stars.

Is your new show going to be any good?
It’s a distressing homosexual comedy program.

What is your favourite swear word?
Tony Abbott.

What are you wearing?
Gym shorts and a singlet. I put these on at 10 AM to go to the Gym. It’s now 3.40 PM and I still haven’t been. It’s raining outside. I could slip. And die. Best I stay in. (Plus when my housemates get home it looks like I’ve been to the gym which is just as important as going)

What was the last show you saw, and how many stars do you give it?
The last show I saw was about 15 minutes ago and it was Huey’s Cooking Adventures. That man’s fingers look like swollen penises. I’m a tad shaken up. 1 star.

Is your new show going to be any good?
You sound like my disapproving dad at christmas lunch! (This is the same dad who when he comes to my shows counts the number of seats sold times the ticket prices and texts me the box office numbers on his way home) ANYWAY! I love my new show! I talk about the 90’s and Tinder and underwear parties and sex and first dates and vegans and horror stories from flatmate finder. It’s super fun!

Show review
The thing about stand up comedy shows is that they’re either terrific or they’re terrible. There is no middle-ground, the audience never leaves thinking, “that was fine”. These are tough gigs, where the performers are not allowed mediocrity, for the only way to achieve a “passing grade” is to bring the house down.

Gina Yashere’s performance at this year’s Sydney Comedy Festival was convincingly masterful. Though her material is sometimes silly and usually apolitical, her delivery is consistently timed to bombastic perfection. Every consonant is mapped out for attack at every precise moment, and every pause is placed just so. Everything is informed by instinct and talent.

At this year’s festival, Yashere was not only given the biggest space at the Factory, but also the attendance of a truly adoring following. She was the commander of a ship full of passengers keen to venture on an hour-long journey, all poised and ready for wherever she may want to go. The lethal combination of a confident comedian at the top of her game and a totally up-for-it crowd, gave birth to an uproarious and thrillingly hilarious night. See you next year, Gina!