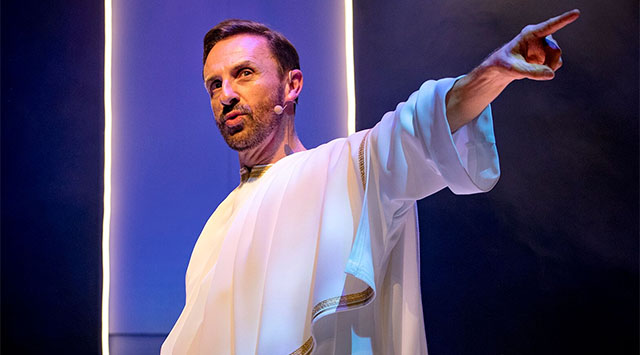 Theatre review
The Christian God comes to deliver a new set of ten commandments in David Javerbaum’s An Act Of God. It is an intriguing proposition, that God would admit to being imperfect. He remains omnipotent, fret not, but this version of the Almighty concedes he had made some very big mistakes, and has decided that it is perhaps time, finally, to rectify two millennium worth of erroneous beliefs.

The play is a fascinating evaluation of religion, and its impact on all of us, regardless of where our faiths reside. It shapes our values, as they stand today, in contrast with outdated precepts that many still insist on upholding. The transformation of God into something closer to a modern day being, as opposed to a purely idealistic creature of fantasy, pushes Javerbaum’s humanist arguments with great efficacy, although the humour of An Act Of God can be inconsistently compelling. Directed by Mitchell Butel and Richard Carroll, the show is relentlessly effervescent, with a flamboyance that sustains our attention confidently, but the writing offers punchlines that seem overly polite within its raucous atmosphere.

Leading man Butel is near faultless in his portrayal of the big man himself, meticulous in approach, with expert timing in his delivery of every line, even when the jokes struggle to meet their comedic objective. Exposed and vulnerable, Butel has nothing to hide behind, in this very immediate staging of God’s presence, and the actor emerges triumphant with a brilliant display of sheer skill and grit. Also noteworthy are the many significant adaptations to the script, in its transposition from America to Australia. Presenting an Aussie version of the Lord above is a shrewd decision, proving so popular, one could hardly imagine any viable alternative.

An Act Of God does not attempt to change our minds about His existence, but it urges us to take responsibility for life on earth regardless. It wants us to give up any notion that the faults of the world are of hallowed design; we have to take charge no matter what we believe about prayer. There may not be any controversial or new ideas in the play, but it provides clarity to secular and religious conceptions of our being, that are often entangled and rarely identified with sufficient veracity. Whatever we wish to happen in the hereafter, our part in the now can never be taken lightly. If humanity is made in God’s image, what we are able to accomplish, must never be underestimated.