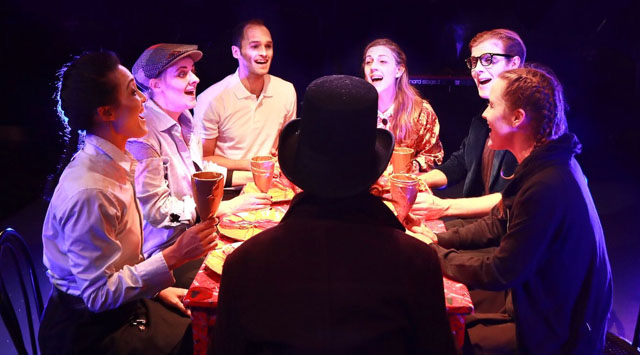 Theatre review
The famous Mr. Scrooge is resurrected, in Melissa Lee Speyer’s retelling of A Christmas Carol. The notorious characteristics remain, but his story is updated for our times, with new resonances for the Trump era. This new Scrooge belongs to the tribe that believes in the “trickle-down effect” of conservative politics; the kind of man who tells his employees that they have to work harder, whilst he dreams up new ways to cut their wages. Scrooge’s sin is not that he has an aversion to Christmas, but that he is selfish and unkind. On that one day his workers are away, and he is unable to scheme and torture, ghosts come to haunt him as he faces his own desperate loneliness. On Christmas Day, money proves ineffectual, and he has no recourse but to confront the man in the mirror.

It is a strong adaptation, poignant and accurate with its melancholic observations of contemporary life. Michael Dean’s direction of the piece turns A Christmas Carol into a pantomime for grown-ups, silly in parts, but impressively enthusiastic in the way its message is communicated. Music by Miles Elkington brings a quirky edge, and although not always calibrated to perfection, its function as guide for our emotional responses from scene to scene, is indispensable. The cast is adorable, and very sprightly, with Bobbie-Jean Henning as a captivating, if not entirely convincing, Scrooge. Michael Yore is memorable as the Ghost of Christmas Past, with splendid comic timing and an endearing sense of mischief. Similarly noteworthy is Bishanyia Vincent, especially in the role of Mrs. Cratchit for the production’s most moving sequence, with a contribution surprising in nuance, proving to be remarkably powerful.

When Scrooge is shown the error of his ways, we are reminded of tyrants everywhere who refuse to acknowledge the damage they do, even when presented with incontrovertible evidence. Our cynicism in the age of “fake news” has taught us to expect the worst from men in power, who will deny all their crimes, no matter how plain the truth that is laid out before their eyes. We cannot afford to do nothing and wait for bad men to come to their senses, but their dominance in our world means that we have little at our disposal, in terms of remedy or retribution. It is idealistic, indeed fairytale-like, to wait for the miraculous return of kindness in today’s climate, but on the darkest days, it does seem to be the only thing left. It is perhaps pertinent at Christmas time to remember that Jesus Christ had said, “do not be overcome by evil, but overcome evil with good.”