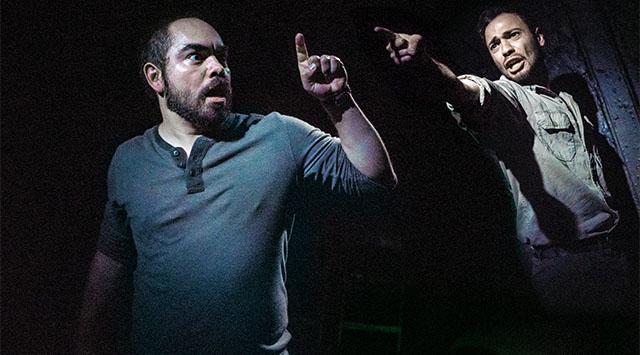 Theatre review
It is always good to see the bad guy fall. In Arthur Miller’s A View From The Bridge, Eddie is the patriarch who gets torn down fantastically by his own moral infractions. The dramatic tension is derived however, not from the pleasure of witnessing his ruin, but from the delusions that he suffers, in his inability to see the damage he causes, as he goes about doing what he incorrectly perceives to be good and right.

The work is an indictment of the archaic and unjust systems of social control we continue to endure, but its poignancy lies in the portrayal of fragility and discontentment in those who are thought to benefit most from those infringements. A View From The Bridge is about toxic masculinity, and the destruction that men bring upon themselves by perpetuating traditional notions of gender. Instead of fulfilling their promise of order and prosperity, Eddie discovers that the power he so stubbornly clings to, reveals itself to be of service to none of the people or ideals he holds dear.

The greatest success of this tremendously gripping production, is director Iain Sinclair’s rendering of Eddie as a tragic but unsympathetic character, made to be held accountable for his actions. We see his immense vulnerabilities but are dissuaded from making concessions on his behalf. Miller’s text is romantic in its depictions of the working man, but this is a production that emphasises, appropriately, his culpability and faults.

Actor Ivan Donato is spectacular in the role, simultaneously savage and sensitive, allowing us to view Eddie from the psychological personal and more importantly, as the indefensible villain of the piece, even if Miller’s narrative has a precarious tendency to position him as victim of circumstances. It is important that although we understand the character intimately, we are prevented from ever letting him off the hook. Donato provides all that we require to judge as harshly as he deserves.

The 1950s American melodrama of the piece, is deliciously executed by all the cast, each one intense and exacting in their contributions. It is an incontrovertibly powerful show, magnificently operatic with its exhibition of emotions, forged through meticulous and nuanced deliberation. As individual performers, all are captivating, and as an ensemble, their collective chemistry is quite explosive.

Sinclair’s inventive use of space, across two planes, cross-shaped in its “theatre in the round” format, keeps us thrilled and engaged. Defenceless against the huge personalities and their extravagant exchanges, in these very close quarters, we get involved, in the most meaningful way, studying closely as each scene unfolds, shifting our moral compasses as the plot moves us purposefully through violations and conundrums. There is incredible sophistication in the director’s approach; our hearts and minds are told a story with astonishing expertise. Also remarkable is Clemence Williams’ work on sound design, with its ebbs and flows manipulating at will, every transformation of atmosphere, whether lavish or minute.

Eddie makes repeated demands about being given respect and honour, but does not offer the same to others. His narcissism expects that he alone wears the pants in the house, and everything else falls into place accordingly, as a matter of course. Even when his preposterous behaviour lands him in hot water, he thinks that the world has wronged him. We can tell the misogynists and homophobes that their actions and attitudes need fixing, but like Eddie, most will not acknowledge the evil that they produce. Waiting for broken systems to mend themselves is futile. In a way, A View From The Bridge suggests that radical force is inevitable in real progress, but violence must never be considered the only means to an end, even if it is excellent entertainment, witnessing brutal torture of our enemies.