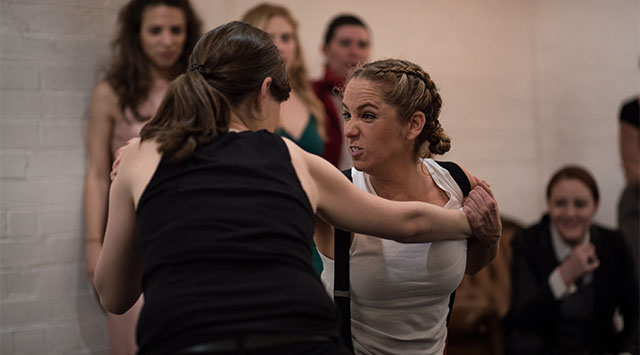 Theatre review
Drag kings can be thought of as women who overtly reject rules of social behaviour as they pertain to femininity, and thus represent the ultimate symbol of resistance against sexism, or we can think of cross-dressers, as women performing gender in a way that would elevate these individuals most effectively, in immoral structures that champion and venerate masculinity.

In director Shelley Casey’s rendition of As You Like It, a cast of twelve women play all the roles, female and male. It is a display less about the content of the piece, than it is about making a statement on the gendered imbalances pervasive in the state of our art and of our society. Shakespeare’s writing can only be considered misogynist by today’s standards, so the need to find a way to seek redress always seems urgent, but it remains an issue, that unquestioned and perpetual reverence for this great exemplar of Western theatre. It would be remiss to think that the absence of women of colour on this Australian stage, is simply a coincidence.

Tradition and feminism do not make a convenient pairing. The production is an experiment in the negotiation of a space between the progressive and the conservative. It succeeds when making fun of macho stereotypes (actors Prudence Holloway and Charlotte Tilelli are endlessly amusing, with their extravagant mockery of hypermasculinity), and when it blurs the representation of heterosexuality, the results are thrilling, but the production is awkwardly respectful of the original text. We have to wonder what it is that it wants to protect and preserve, so vehemently.

If one is able to set aside politics, this is a Shakespeare comedy that can always be relied on to delight. Casey’s two-hour version is fast and funny, with a comforting warmth that draws us in. In the role of Rosalind is Amy Hack, fabulously expressive, and determined to entertain with her dexterous creativity and captivating effervescence. Also impressive is the use of live music, cleverly composed to bring a sense of enchantment to the setting.

It is debatable whether well-behaved women can make history. This production of As You Like It is made of sugar and spice, possibly a little too nice for those of us seeking something radical. If we wish to be rid of the old guard, our actions need to be more than symbolic. The atmosphere is ripe for a brave and audacious movement, that will bring subversion to two-and-a-half centuries of violation on this land. Only those in direct participation, will know that the revolution has begun.