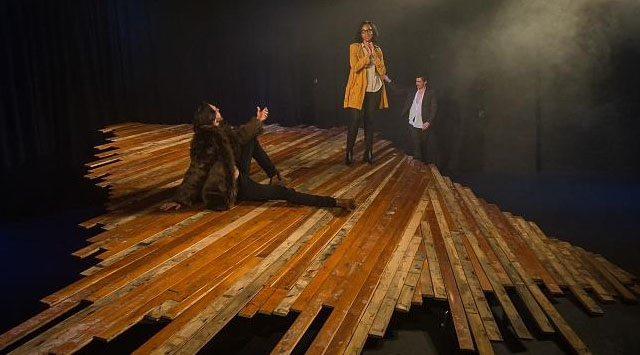 Theatre review
Paul is a rock star who plays to crowds of 100,000 people. That scale of extraordinary fame and fortune, is an existence beyond the comprehension of us mere mortals. In Simon Stephens’ Birdland, we see a kind of dehumanised individual struggling to find a sense of normalcy in a world where everything is permissible and accessible, and where everything is eventually reduced to meaninglessness.

The play lifts the lid on the lustrous personalities who entertain us. We fall in love with these strangers, and envy their lifestyle, thinking that theirs is the ultimate freedom, to have every request and desire met. It is fascinating to imagine what it must be like, to not be able to want, after having consumed everything. The human compulsion to pursue that which remains unsated, is crucial in how we are able to operate from day to day. The depressed cannot get out of bed, because nothing is worthwhile. The superstar experiences something similar, when all appetite is quelled even before they appear.

Paul becomes increasingly anaesthetised, resulting in a frantic escalation of indulgence and excess. Graeme McRae is strong in the lead role, offering an interpretation that is detailed and intelligent. It is extremely demanding work, and while our compassion for Paul is carefully sustained for the entire two hours, McRae’s stamina seems to wane in the later stages. The production is quiet and sensitive, with director Anthony Skuse’s remarkable ability to provide a sense of fragility keeping us engaged, but the bareness of the stage, although visually appealing, can at times feel overly taxing on the actors, who have nothing but themselves to make each moment spark.

It is less daunting for the rest of the cast, who play a series of supporting characters orbiting Paul. Charmaine Bingwa is outstanding in Birdland. As an African escort, she is dangerously alluring, and as an English policewoman, she is deliciously unkind, but it is in the scene where she plays Paul’s father that Bingwa is most memorable. We are suddenly overwhelmed with emotion, when we see the only thing of genuine value to Paul, falling to pieces along with every other aspect of his being. It is a beautifully performed show, with each actor captivating in their passionate commitment to the craft.

It is healthy to want better for ourselves, and dreaming big is a way for us to find impetus to live with excitement and joy. A state of contentment however, must never be absent. The tension between needing more, and feeling satisfied, might seem a contradiction, but it is in finding a way to negotiate their co-existence that we can perhaps achieve emotional and psychological stability. Nobody rejects Paul, so it can only be up to him to say no.