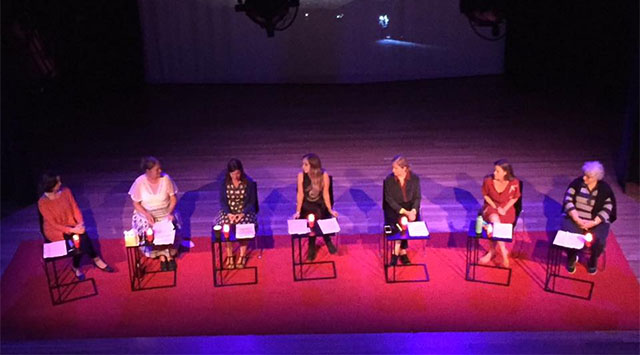 Theatre review
The journey begins from an unremarkable place. Seven women of Caucasian appearance sit in a row, talking about their children. The play is verbatim, with a script collated from interviews about the topic of motherhood, a life experience that many share, but little of which remains surprising. When humans bond, we can only embark with conversations that are pedestrian in nature, and then destiny decides if things can get deeper.

Halfway through Motherlode, the discussions become powerful, disarmingly so. The women begin to reveal the darkest of their lives, in order to get to the crux of how they manage their relationships with children. We can only love the way we had been shown, so much of the talk is about these women’s own parents, and one of these stories in particular, is nothing short of harrowing.

Actor Karli Evans’s retelling of a character’s shocking childhood encounters involving unimaginable abuse, is by far the most poignant of the vignettes that make up the play. Evans delivers the monologue with a sense of psychological accuracy, along with thorough emotional authenticity, causing us to not only witness the pain hidden behind some of our everyday facades, but also to understand the depth of meaning that having children could mean.

Similarly memorable is Monette Lee in the role of a bubbly, spirited immigrant of Russian origin, who offers balance to narratives that tend to depict Australia as being singularly bourgeois. Lana Kershaw’s portrayal of a lesbian-identifying sex worker and PhD candidate, who had chosen to be a single parent, adds immeasurable texture to an otherwise narrow image of motherhood. Both Lee and Kershaw use the outsider qualities of their parts to excellent effect, equally impressive with the exuberance they each bring to the stage.

The production concludes with a strong message of solidarity, but we think of the other mothers who are not represented on this stage. To understand our families, is to understand our cultures. It is not entirely clear if women of colour are among Motherlode‘s interviewees, but the increasingly diverse face of Australia requires that we broaden our conceptions about values and traditions. In anthropological investigations of motherhood, it is important to understand that we come from a range of backgrounds as varied as our skin colour. As we discover what it is to be an Australian mother, it is crucial to explore how our Indigenous women relate to the subject. If we are unable to cherish the past of this land, and if we continue to ignore the changing complexion of our evolution, we will never be able to completely know who we are.

Response from show producer:
Thank you for seeing the show. And thank you for your comment about the casting – this is such an important issue and one we would like to briefly comment on. The production had culturally diverse collaborators on the project during its development process, but unfortunately due to last minute scheduling conflicts to do with family and work opportunities, a couple of cast members could unfortunately not proceed with the show. As we were unable to recast appropriately to tell the stories authentically, we decided to focus on this phase as a development stage of the project with a limited cast. We are really excited for the next phase where we will be actively increasing the culturally diverse stories told and broadening the conversation around motherhood.