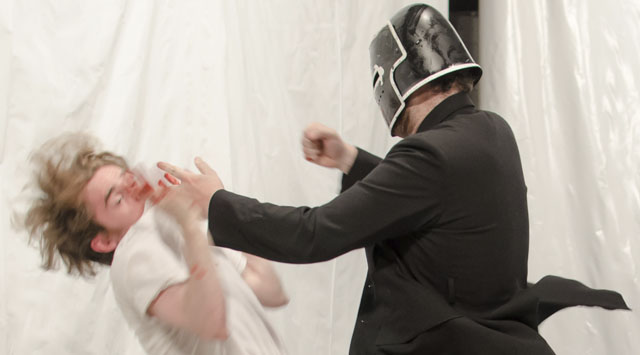 Theatre review
It is a story of greed and betrayal, arising from unbridled ambition, but it is also a parable of retribution and punishment. The transgressions in Macbeth reveal dark and buried parts of our psyche, although neglected in much of daily life, we all know to exist beneath our amiable surfaces. Our conscience keeps things in check, but some of us use divine inspiration as permission to carry out less than pleasant deeds. Shakespeare’s characters know that the supernatural forces they conspire with are evil, but in our realities, they are never quite so undisguised.

Saro Lusty-Cavallari’s rendition of the play is a straightforward telling of the story. A few artistic licenses are taken in his effective conflation of characters, but the plot is left soundly, almost radically, unaltered. Good work on music selection by Lusty-Cavallari brings drama to the production, but the frequent use of stage blood has a tendency to look puerile. Flashes of strong acting by Hannah Cox as Lady Macbeth and Jem Rowe as Malcolm, introduce moments of elevation to a cast that is generally underwhelming. Robert Boddington as Macbeth is insufficiently expressive, in body and in voice, neither to entertain nor to provide psychological insight into one of Western theatre’s most infamous characters.

Countless other productions of Macbeth have come before, many of which have been huge successes. Artists have the right to take on any classic, should they think themselves capable, but they must remain conscious of their audience’s relationship with the text in question. It is highly likely that any performance of a work like Macbeth would be compared to memorable versions that have come prior. Young artists can choose between cutting their teeth with challenging material in the public domain, or settle for something more attainable. Impatience usually results in clumsiness, but it is also a valuable quality necessary for us to soar at great heights.

I've just heard that #ChrisHo has succumbed to cancer. I'm not one to think of death as a necessarily bad thing, and for a great person like Chris, who has done so much as a rebel and agitator for ultra conservative Singapore, I tend to believe that death is a sort of reward for those who are too good for this earth. Of course we would benefit from having him stick around for a little while longer, but I can only imagine the exhilaration Chris is experiencing right now, as he approaches those pearly gates, finally seeing the paradise he had talked about all this life.
#nowspinning @ngaiire #vinyl
Also made a nice connection with @Eugyeene Teh after admiring his work for many years ❤ thanks again to @diversityartsau and @audreyjournal read up on it at audreyjournal.com.au
On behalf of @diversityartsau I spoke with several artists about their work during lockdown... check out my close friend @cat.vandavies (AD at @redline__productions and actor), who shares her thoughts about making art during these challenging times! Thanks to @audreyjournal for publishing the piece ❤ see it at audreyjournal.com
It's been 1 year of Suzy talking shit on @joy949drive, cannot believe it ❤ thank you @studiomason_ @wazzaandrew @joy949 for allowing me to serve the community
Literally half a minute, to do something really good for the world... join me at @donatelifetoday https://www.donatelife.gov.au/
Awful time, pretty night.
Was looking through some storage boxes, and found this CD of the score created by @markchanarts for the production of #MButterfly @davidhenryhwang by @singaporerepertorytheatre 20+ years ago 📷@mr.heage / makeup by @andyleemakeup
5 eliza st 107 projects 2013 2014 2015 2016 2017 2018 2019 2020 2021 atyp bakehouse theatre company bell shakespeare belvoir belvoir 25a blood moon theatre bondi feast bondi pavilion theatre brevity theatre cabaret carriageworks comedy dance darlinghurst theatre co drama emu productions ensemble theatre erskineville town hall eternity playhouse griffin theatre co hayes theatre co jackrabbit theatre kings cross hotel kings cross theatre king street theatre mad march hare mardi gras 2014 montague basement musical new theatre nida parade theatres old 505 theatre old fitzroy theatre outhouse theatre co pact performance art play red line productions review roslyn packer theatre sbw stables theatre seymour-centre siren theatre co sport for jove subtlenuance sydney sydney festival sydney fringe 2013 sydney fringe 2014 sydney fringe 2015 sydney fringe 2016 sydney independent theatre company sydney lyric theatre sydney opera house sydney theatre company sydney university dramatic society TAP Gallery theatre the depot theatre the factory theatre the genesian theatre university of sydney walsh bay wharf theatres