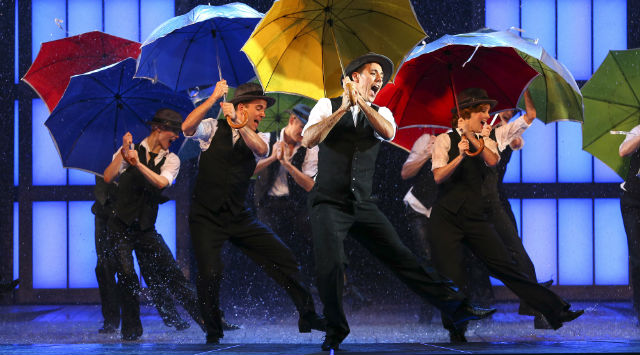 Theatre review
Regarded by those in the know to be the greatest movie musical of all time, Singin’ In The Rain takes place in Hollywood in the late 1920’s, when sound had begun to disrupt the silent film industry. This theatre production, based on the 2012 London revival, is similarly lighthearted, with a simple storyline that provides justification for a lot of song and dance in a style that harks back to the golden age of cinema.

Performers Jack Chambers and Erika Heynatz are called upon to provide the laughs in distinct comic sequences that showcase their talents appropriately, but the production suffers from a lack of exuberance that maintains an unfortunate muted tone over proceedings. Visual and sound design elements seem to be overly subdued, resulting in a show that often feels distant and lifeless. In the role of Don Lockwood is Grant Almirall, no less skilled and technical than Gene Kelly in the original film, but his very nifty footwork does not make up for the shortfall of charisma that we have come to expect of a Broadway style leading man.

Gretel Scarlett’s best efforts as supporting character Kathy Selden bring memorable moments of theatrical brilliance, leaving an excellent impression with polished execution of choreography and sublime vocals. Equally accomplished are the ensemble players, who present magnificent dance sequences that form the strongest feature of the production. Andrew Wright’s contribution as choreographer is outstanding, and almost compensates for the show’s minor but noticeable imperfections. Much excitement surrounds the heavy rain that pours on stage for the eponymous number; unquestionably gimmicky but also spectacular and beautifully realised. We go to musicals of this genre for amusement, and Singin’ In The Rain certainly does offer entertainment and escape, as well as bucket loads of nostalgia for the more romantic among us.