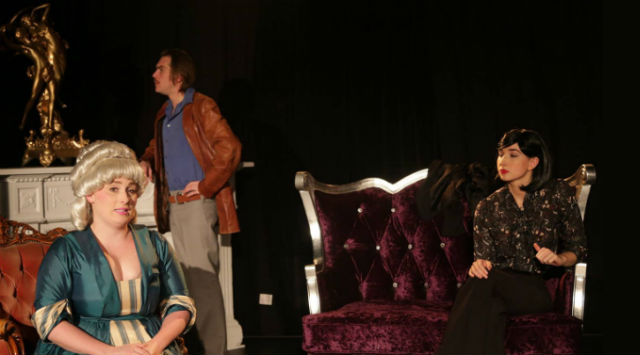 Theatre review
Sartre’s 1944 play No Exit is about three people coming to grips with their new existence post-mortality. The famous line “hell is other people” is heard late in the piece, and like the myriad ways in which it can be interpreted, the play is abstract, to be given meaning as one wishes. The concept of hell is a powerful one, considering its uncompromising permanence. Life may not be much more pleasant than hell for some, but hell’s eternal inescapability is truly terrifying.

The staging, directed by Andrew Langcake, is a simple rendering that attempts to bring realism to the absurdist piece, with an emphasis on finding character coherence over philosophical expression. Sound and lighting are strangely neglected, resulting in a supernatural realm that is unfortunately devoid of atmosphere. Performances are committed, and each personality is distinctly shaped by a cast of spirited actors, but chemistry is often lacking. Relationships are key in No Exit, and unable to portray them with enough clarity and dynamism, the production struggles to communicate beyond the superficial.

Individuals experience life from perspectives we know to be personal, but it is debatable if anything is ever unique in how we each see the world. We can only understand things from our singular positions, but in every transaction that we inevitably conduct with other beings, we become transformed, objectified and absorbed into another consciousness. The self is unable to remain separate, and meaning can only come from that act of concurrence, voluntary or involuntary. If other people will give you hell, they are also your only source of pleasure. How much the self can do to manipulate the other will always be limited, but happiness is always best managed within one’s own hermitage.