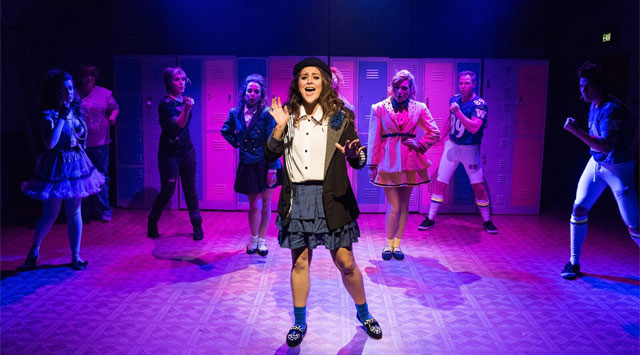 Theatre review
The film Heathers is a cult favourite from 1988 that surprised viewers, with its dark approach to the teen movie genre that had been in vogue at the time. What appeared on the surface to look like standard fare about high school hierarchies and puppy love turned out to be fascinatingly morbid. Its exploration of teenage angst in a plot that discussed suicide and murder preempted today’s attention of school shootings and other massacres of the kind. Laurence O’Keefe and Kevin Murphy’s musical version is a much more frivolous interpretation of events in the movie, although it is noteworthy that stories and characters are largely kept intact. Most of the songs are well-written, but they range from comical to sentimental, with very few occasions for the macabre that the original film was successful at generating.

Accordingly, Trevor Ashley’s direction of the work is hugely comedic, with meticulous focus on amplifying every funny moment. His style is deafeningly camp, which is not unsuitable for the production, but that distinctively loud tone of presentation tends to play on a single level with little variation, and allows for scarce instances of complexity. The first act in particular, is relentlessly raucous. We cannot help being engaged, but the story feels empty. The writing does not seem to provide sufficient space for tension to build, and the central character Veronica is not given a realistic chance at making a strong enough connection with her audience for the narrative to work as well as it does in the film. Additionally, the leads do not have the same superstar charisma of Winona Ryder and Christian Slater to keep us spellbound, but Jaz Flowers and Stephen Madsens’ accomplished singing does a good job of moving the show along.

Act Two is a marked improvement, with more compelling plot twists and greater disparity between scenes. Supporting performers impress in their solos, including Lauren McKenna as Ms. Fleming, the flamboyant high school teacher whose intentions to help the students are more self-serving than altruistic. McKenna is inventive, confident and very effervescent in her cheeky depiction of the faux hippy woman. Vincent Hooper plays the Sweeneys (senior and junior) with outstanding energy and enthusiasm. The performer embraces the bawdy style of humour and creates hilarious exaggerations of the American jock, which delivers some of the biggest laughs of the night.

Heathers the musical is amusing at every point, with many entertaining sequences of choreography and effective comedy. It does however, miss the opportunity for creating greater tension and poignancy with its resonant subject matter. The teenagers in Heathers grow up too fast. Their loss of innocence requires deeper exploration, but as in real life, we brush aside their concerns too easily.