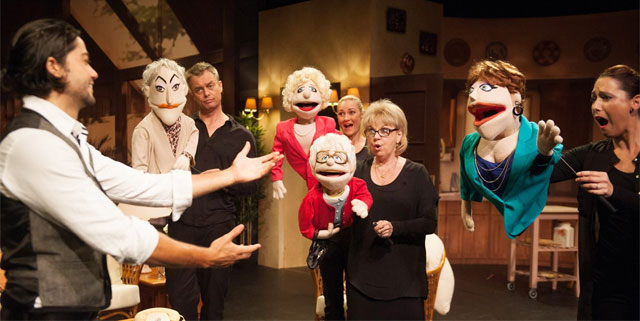 Theatre review
The Golden Girls was a big TV hit series in the 1980s, and has left an indelible mark on audiences everywhere. Many of us remember catchphrases, character traits, relationship dynamics, and plot structures. Indeed it is nostalgia that gives this revival in puppetry form its appeal. There are minor references to contemporary culture (like a “cell phone”, Fifty Shades Of Grey and Kim Kardashian), but effort was put into a show and script that is absolutely faithful to the original. The set is a delightful re-creation. We even get ad breaks that feature commercials from the era, of defunct fashion labels and forgotten brands.

All four puppeteers have a thorough understanding of the roles they assume. The mannerisms and voices they replicate are funny and thoroughly delightful. Donna Lee’s depiction of Sophia is endearing and, like on the TV show, delivers the biggest punchlines. Darren Mapes facial expressions are so reminiscent of Beatrice Arthur’s Dorothy, one probably looks at him more than his puppet. Julia Billington never fails to get a laugh whenever she brings up St. Olaf as Rose, and Chrystal de Grussa’s Blanche is a hilariously overblown version of Blanche Devereaux, whose “man-eater” antics remain uproariously ridiculous. Also noteworthy is Nigel Turner-Carroll, the fifth member of the cast who tackles a host of male support characters with aplomb and great humour.

The production is part of the 2014 Sydney Gay & Lesbian Mardi Gras program, not only because of Blanche’s gay son’s appearance, but also because of our memories of the original series’ efforts at discussing issues such as coming out, same-sex marriage, AIDS and discrimination against people with HIV. This loving tribute has rekindled a strangely deep relationship between audience and those golden girls. These ladies are fictional, but they are also dear friends.