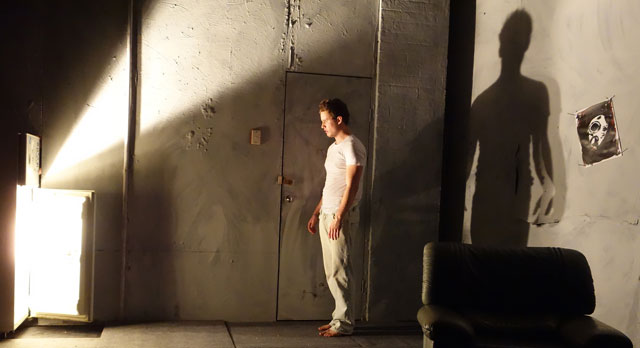 Theatre review (of preview performance, Dec 11)
The best stories in theatre and film contain messages and morals that are applicable to lives everywhere. The Dreamer Examines His Pillow seeks to unpack profound truths of our shared experiences, and present on stage an enlightened point of view that can enrich and inspire everyone. John Patrick Shanley’s script was written early on in his career, but is masterful in the way it expresses its philosophies, mainly from the perspective of a middle-aged character.

Peter McAllum plays Dad, the aforementioned role, with powerful conviction and exquisite relish. It is evident that McAllum has a good affiliation with the material, and many of the play’s complex ideas are articulated effortlessly and clearly through his portrayal. McAllum is thoroughly enjoyable to watch. He dominates in his scenes, and is quite obviously having the time of his life in this unique gem of an opportunity.

Direction by Vashti Pontaks relies heavily on performances from her three actors, who are all keenly energetic, but who also vary in experience and ability. While they are all focussed and charismatic, the depth of some sections do not always translate well when in the hands of the younger performers. Chemistry is also lacking between the young leads, and humorous moments are sometimes missed. Pontaks’ strength lies in the more serious aspects of the play, but the length of the work requires that its lighter sections deliver the laughs, in order that interest is more effectively sustained.

A lot of Dreamer is about courage, and Pontaks drives that message through beautifully. She also constructs a world where the concept of fear is palpably believable. The courage we need for living full lives, and the courage artists need for bringing their work to fruition, are explored and on display in this earnest and dynamic production. It is up to us to rise from our slumber, and to decide for ourselves whether an unexamined life is worth living.

One thought on “The Dreamer Examines His Pillow (Unpathed Theatre Company)”