In lieu of realistic settings for many of Blame Traffic‘s on-road scenarios, the production takes a minimal but effective approach, with chairs and three sliding monitors, to convey its oscillating range of times and spaces. Designer Patrick James Howe keeps things slick and restrained, for unobtrusive solutions that provide surprising impact. Collins’ direction of the piece is taut, with an air of urgency that has us absorbed for its entire hour.

An energetic and rigorous ensemble takes us through the fast-paced action. Emma O’Sullivan shines in both her roles; she turns a very strange Jacquie convincing, whilst endearing us with her quirky characteristics, and as Dion, the actor’s interpretation of a young Italian-Australian is simply hilarious. Dion’s uncle Zio is played by Nic English, whose honest impulses make him a riveting presence. Violette Ayad and Alex Stylianou provide the fireworks with their partnership, in a segment memorable for its scintillating chemistry, both performers taking the opportunity to demonstrate their impressive skill and natural talent. Also wonderful is Mary Soudi who brings a thoughtful complexity to her part of Sarah.

Although not particularly provocative, Blame Traffic is an entertaining work of theatre, that uses the bane of our city’s daily existence as catalyst for its storytelling. We see people interspersed but connected, each heading in their own obstinate directions, occasionally stopping to think of others. Individualism and independence are highly valued in our metropolis; we believe in the freedom that allows people to live to their full personal potentials, regardless of tradition and conventions. It is also clear that Sydney is not an entirely selfish city, even if we do feel like we dwell inside bubbles that only seem to ever grow smaller. Our roads converge every day, allowing our trajectories to meet, at places like the theatre, where we congregate as one, to figure out the people we are, and the people we want to be. 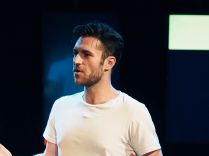 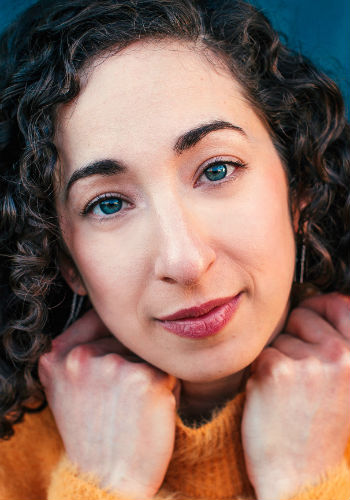 Mary Soudi: What’s your favourite part about playing Lilian (Lilo)?
Violette Ayad: I love that I got to name this character myself. In fleshing out the character, the director and I decided that we wanted her to have a name that was a little ambiguous in relation to her cultural background. A name that could belong to someone from a Middle Eastern background (like myself), but was not specifically Middle Eastern (much like my own name). So, I named her after one of my aunties, Lilian, who everyone in the family calls ‘Lilo’ for short.

What’s something that has really surprised you during the creation of Blame Traffic?
The ease with which we’ve moved from reading and workshopping the script to finding the scenes on the floor. It has been a real reminder that when the time is taken to get the script, the foundation, right, everything else can be built on that with clarity and specificity. Part of the joy of having a writer who is also the director was that we could stop and identify problems in the script, and fix them in the script, rather than trying to gloss over them in the performance of it.

What main idea do you think will stay in the minds of audience members in the hours/days after they see the show?
I’d like to think that people’s responses to this play are very varied based on their own experiences of coincidence and serendipity in their lives. But ultimately, I would love everyone to consider a little deeper the amazing moments of chance and luck that make up life. In a world that moves further away from institutional religion every day, finding joy in these chaotic and random encounters feels like a pretty comforting way to live.

What’s your craziest traffic-related experience?
Oh, so many. I was one of those terrible young drivers you always fear is around the corner. I got my license in West Australia before the introduction of the mandatory L plate waiting period and with only 25 driving hours required. This is terrible, but I once lost 4 demerits and $600 in a 24-hour period when I was 19. Find me in the foyer and I will tell you how. Don’t worry, I don’t own a car in Sydney or drive very often, and definitely take road safety more seriously now that I’m older.

Why are you passionate about this production?
This production began as a way to bring together all of my favourite class mates and friends from the training institutions I’d studied at, and show the world how it’s done! Every decision in this production represents what I love seeing and what I believe in. At the core, we have a well-written story that engages the heart and mind equally. Add to that a cast of incredibly different performers that share an ability to contribute, generously, to a whole production, beyond their own specific part. And finally, a contemporary and innovative design team, making funky beats and a simple, but beautiful, stage design.

Violette Ayad: What is your favourite thing about the Blame Traffic script?
Mary Soudi: The humour that’s sprinkled throughout it! One scene in particular cracks me up every single time – I won’t reveal it, but I will say that Emma O’Sullivan plays a teenage boy behind a wheel of a car, and it is just so, so hilarious.

What makes this project so exciting for you?
I’m excited by this project because I think Michael is one of the brightest young writers in Australia, and Blame Traffic is his best work yet. Being able to bring this brilliant story of his to life alongside so many brilliant creative minds is pretty darn magical.

Having just finished the Bell Shakespeare tour of The Players, how much driving do you think you’ve done in the past year?
Probably a billion hours. Those long drives were the best way to see this gorgeous country and fully take in just how huge it is. And I must say, I’ve truly surprised myself with my ability to park a giant Kia Carnival (mini-van/small spaceship) in so many cramped little parking lots all around Australia. Believe in yourself, folks!

What have been the benefits of working with people you’ve trained with?
Is there anything better than making art with your favourite humans? Knowing each other inside and out is a huge benefit, because after all the years we’re trained together we end up knowing exactly where each other’s creative genius lies, and can bring it out of each other. And all the endless love and tomfoolery!

Without giving anything away, what do you think is a moment people will really respond to in the play?
A gorgeous moment of realness between a boy and his uncle, where self-doubt transforms into self-belief. Come see it to find out what I’m talking about!