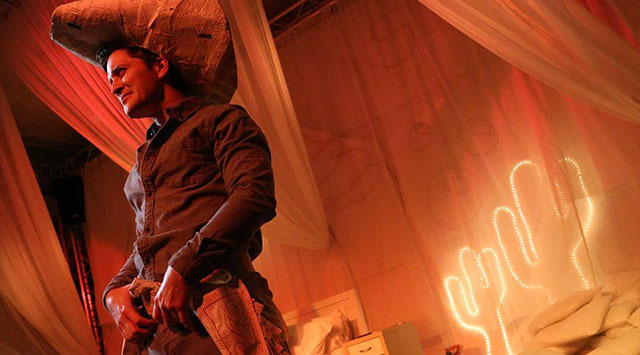 Theatre review
When we first meet Abby, she surprises us with her prudishness. We think of sex as being universally appealing, and in this day and age, talking about sex is certainly de rigueur, if not interminable, so we wonder what problems Abby is struggling with, that makes her so uncomfortable with the topic.

Erica J Brennan’s This Is Not Mills And Boon is a smart, ambitious piece that deals with a young woman’s sexual awakening, or more accurately, it is about Abby’s self-discovery beyond the indoctrination and traditions that our young are subject to. There is good attempt at depicting sexuality as being individualistic and idiosyncratic, and hence, a fundamentally deviant feature of what we consider to be human nature, but Brennan’s characters remain bound to an ideal of monogamy and heteronormativity, which prevents the play from foraging deeper into its philosophical interests, thus losing an opportunity to be truly subversive, or edifying, with its declarations.

Director Richard Hilliar introduces a wanton sense of humour to fantasy sequences that makes the show very enjoyable, but a tendency to be overly earnest with our protagonist’s central predicament, can make its naturalistic scenes needlessly severe. Abby needs to lighten up, as does the show.

Funny lady Alison Bennett delivers laughs in all of her extravagant guises. Sharply intuitive, and wonderfully campy, it is a very bawdy performance that pushes all the right buttons (look out for some physical work featuring Bennett’s extraordinarily dexterous tongue). Also very comedic is Gabe Fancourt as the endearing boyfriend Sol, whose unabashed approach to the portrayal of sex object, is as refreshing as it is hilarious.

Although Emma Chelsey’s interpretation of a plain and reserved personality can often feel too literal and hence lacklustre, her Abby is dignified and honest, with a sincerity that makes the whole exercise convincing. The troubling relationship between Abby and her father is a crucial part of the narrative, and Lynden Jones is strong in that role. His lines are perhaps not written with sufficient elegance, but Jones demonstrates excellent conviction even when the dialogue turns precarious.

The show makes fun of “Fifty Shades Of Beige”, but is itself shy with its own interrogations. It may not be Mills and Boon, but it is certainly no Marquis de Sade either. There is a naivety in how it thinks about sex, but its fervent need to reject convention in favour of a self-determined experience of sexuality and of identity, must be celebrated.

What makes each person feel good, is rarely the same, but what makes us all the same, is the need to discover the truth that lies within. It is human to want to poke and prod, to find something that feels resolutely at the core of our existence. Whether through art or through fucking, we can get to the thing that resides deep at the centre, that holds the meaning of life. 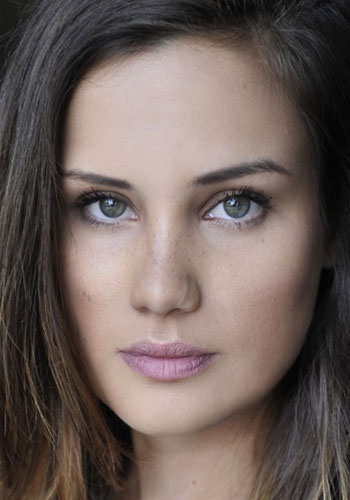 Gabe Fancourt: What’s the most challenging aspect of revisiting a character you’ve already played?
Emma Chelsey: I think it’s always important not to bring judgements or preconceived ideas of the character or comparisons to what you have done previously and just start again with a fresh set of eyes. This was challenging to do but I feel it was helpful. There was a lot of development to the script so a lot of it was new and hadn’t been investigated yet so I was able to go deeper having explored this person before and learn a lot more about her the second time around. It’s also easy to fall into a previous way of delivering lines so you have to break that vocal pattern and discover it again as if for the first time!

What did you learn about the play getting it in front of an audience the first time?
That it’s silly, funny, absurd and a thrill!

What is your character’s spirit animal?
Abby is a horse for sure. Flighty, skittish, easily affected by the energy around her, sensitive and can display both dominant and submissive behaviour depending on the situation!

How do you prepare for/ approach scenes that are sexual or intimate in nature?
With laughter. Literally that’s all you can do. You obviously make sure you and your scene partner are comfortable, you rehearse very specifically, everything is choreographed and then you laugh about it a lot…

What’s the strangest/ most unconventional thing about this play?
Sex on stage. It’s confronting and quite foreign to see in theatre and I am intrigued by what the audience reaction will be. Also, the sexual fantasies are strange and wonderful! 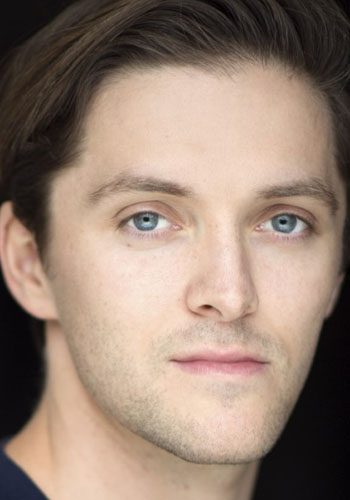 What is one of the questions you hope this play asks or answers?
I think with a large part of itself this play is grappling with the extent to which our identity, and in particular our sexual identity, is shaped by our sense of shame. How can we connect with our tastes and preferences when those impulses are met with reflexive shame?

What is the craziest acting related thing you’ve ever done?
In my first school play I was cast as a question mark. For research I interrogated people relentlessly with questions. I also hurt my back trying to get the physicality right.

What has been your favourite part of the process so far?
It sounds nerdy, but I really love the dramaturgical element involved in the development. Sitting down with a script and really sharpening in on how the scenes function and how the story is told in a clear and compelling way is something I find very satisfying.

What do you think is the naughtiest part of this production?
Definitely the fish on fish sex scene. (Spoiler alert) 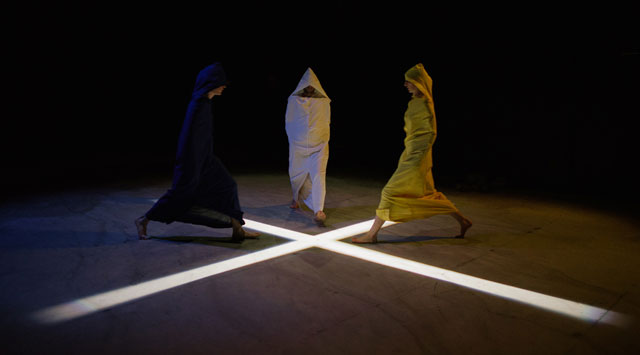 Theatre review
Encompassing four short plays by Samuel Beckett; namely Quad, Rockaby, Come And Go, and Catastrophe, this exploration into Beckett’s experimental work is a daring venture into some of the most abstract writing for the theatrical space. Whether entirely composed of stage directions or of barely coherent dialogue, this is a collection of pieces that requires an examination of a practitioner’s relationship with conventions and ingenuity. Beckett uses time and space as language, without the aide of stories, to find a mode of communication that necessitates original thought from all participants. We confront the nature of theatre, and of art, to contemplate how the stage operates, and also how our psyches and senses work in the creation and reception of art.

The only certainty in theatre should be the very presence of an audience in a space that is activated in any capacity by artists. Beckett’s writing is interested in the essence of that connection, and the creative mechanisms that become available when people converge at showtime. Erica J Brennan’s direction embraces the ephemeral quality inherent in the text, to create an experience that compels us to pay attention to the erratic movement of time in the production, through fascinating sequences, bewildering moments, and periods of boredom. The work is a risky one that can alienate, but the discovery of theatrical qualities beyond entertainment and sentimentality, in its sophisticated deconstructed form, is valuable. The encounter is often meditative, hypnotic and mesmeric. Our approach as spectators is an unusual and stimulating one, and even though the discomfort and challenges it presents can be disarming, what endures is striking imagery and unique sensations that are rarely encountered.

Being present is key to the appreciation of Metafour, and being there is its main point. The meanings that the show imparts are difficult to articulate, but their subliminal existence is powerful. There are forms of art independent of words, and it is their visceral effects that demonstrate their relevance. At its best, this presentation of Beckett’s work opens minds and advances cultural milieus. At its worst, it numbs our senses, but we cannot resist returning to the impressions it leaves behind, for a repeated experience of their mystery. Time is made elastic, and the show continues to linger. 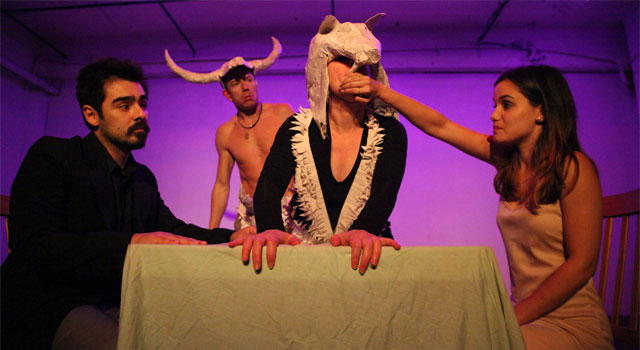 Theatre review
Sex is a difficult thing to talk about. It is deeply personal, and social etiquette dictates that we keep it hidden under wraps. What is proffered to be general and common knowledge are invariably narrow definitions of healthy sexual functioning and practice. Maturity is therefore almost always an awkward process that involves young people grappling with unexpected deviations from those preconceived notions of norms, and the turmoil that it precipitates can be quite agonising.

Erica J Brennan’s This Is Not Mills And Boon is about Abigail, a young woman trying to understand her sexual self, through the discovery of sexual diversity in erotic literature. The plot is devised with a creative vision, using well-considered anti-chronological timelines and the meaningful juxtaposition of fantasy with reality, but for what is clearly the most risqué of themes at its centre, Brennan’s approach is uncomfortably polite. The raunchy context requires a certain quality of bluntness, or perhaps a coarser sensibility, in order that its jokes may cut deeper, and its many libidinous situations resonate with greater danger and tension.

Director Richard Hilliar introduces a good amount of theatricality to the staging, with strong support by designers (Ash Bell’s costumes are especially noteworthy) to create a show that is effervescent and fast-paced, but it seems to shy away from the opportunity for an exploration into sex and its boundaries that goes beyond the surface. Occupying centre stage is Abigail’s tedious impassivity, which grows more and more pronounced with time, and its presence is allowed to take over the story without it ever being interesting enough. Emma Chelsey plays the lead with a convincing naiveté and an appearance that easily portrays both girl and woman, but her performance is too plain. Without a sense of complexity that intrigues or titillates, the exercise is one that ultimately feels puerile and overly cautious.

Brennan and her protagonist’s journey from girl to goddess might not be the most compelling tale, but it provides a universal parallel for those of us who have experimented and have found our individualistic inclinations in what could be life’s greatest joy. The revelations that come with the formation of confident sexualities are invariably profound, and it is that kind of poignancy that all work about sexual awakenings have to live up to.