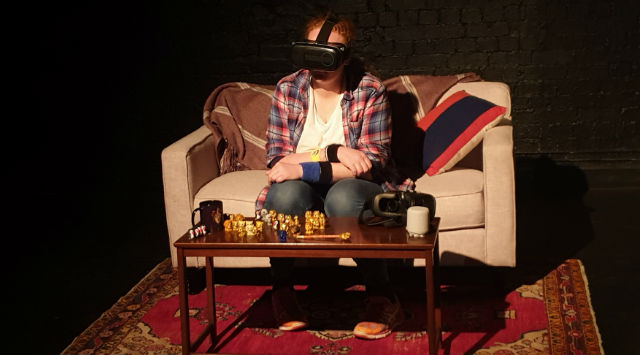 Theatre review
Darcy and Gabby are involved with big time drug dealers, and although the sisters’ illicit activity happens only in the virtual reality world of computer gaming, the emotions being toyed with are completely genuine. Laura McDonald’s Don’t Hate The Player is a clever piece of writing, with thoughtful ideas and a well-considered plot structure. The play however, is likely to be remembered for its humour, rather than the philosophy it suggests. It is a very funny work, fuelled by McDonald’s wonderfully quirky imagination, that delivers a great number of laughs without ever underestimating its audience.

As director, McDonald does not quite render with sufficient intensity, the poignancy inherent in her piece at its conclusion, but there is no question that the jokes being presented from start to end, are entertaining and impressively idiosyncratic. Four performers, each with a distinctive style, are made cohesive by McDonald’s specific approach to comedy. Madelaine Osborn and Rhiannon Watson play the sisters, both actors delightful with the surprising nuance they unearth from within the script, and marvellously inventive with the highly distinctive characters they inhabit. Chemistry between the two is an absolute joy to watch. Atharv Kolhatkar is energetic as Ashan, man of mystery in this story about mutable identities, and Cassius Russell’s intricate manifestations of Reg the cyber facilitator are an unequivocal pleasure.

As the lines between real and virtual continue to blur, what we deem to be organic and synthetic too, begin to meld. What were once easily differentiated, is now increasingly ambiguous, as we come to terms with humanity’s indivisibility from the thing we call technology. Everything that we dream up, originates from us, no matter how wildly alien they eventually evolve. Nature is never stagnant, and being a part of it, we are always learning to live with all its new permutations. There is no need to try figuring out what is natural and what is not, but to know the difference between good and bad, is an endeavour we must forever persist with.