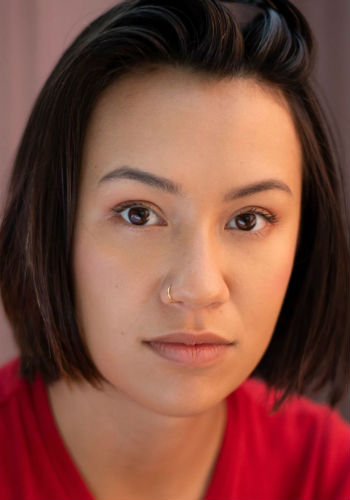 Stephanie Somerville: What’s your favourite pre-show pump up song?
Brooke Rayner: “Joyful Joyful” from Sister Act. Gospel choir and Lauren Hill’s voice – amazing. I remember dancing to it at one of those area spectacular school shows, maybe it’s the muscle memory but makes me want to laugh and cry.

What show have you seen in the last twelve months that’s really stuck with you?
Blackie Blackie Brown. Who doesn’t want a kick ass political comedy about an Indigenous Superhero and too many wig changes to count!? I was screaming in my seat. It was like watching a comic book open and come to life. In the words of the Hot Brown Honeys “Moisturize and Decolonise”.

What made you want to be an actor?
I think having access to theatre in high school and watching these amazing transformations happen and then having the opportunity to do it myself. Once I realised I could explore and feel out someone else’s story there were endless possibilities like … Why be one thing when you can be everything else?

What’s the weirdest thing you’ve ever eaten?
Tripe. I love tripe. It’s cow’s stomach. But specifically Dim Sum style. It appears spiky but is quite soft and chewy, a lot of people reel at it. I ate it for years not knowing what it was. There’s some kind of irony in eating stomach.

What’s something that you and your character have in common that surprised you?
I think Bianca and I share a similar way of communicating. It’s knowing what you want to say but everything coming out of your mouth is disjointed, three different versions of saying the same point at once. Word vomit and then back tracking to try and fix what you’ve said. I’ve always been told I have terrible sentence structure.

Brooke Rayner: If you were an animal what would you want to be and why?
Stephanie Somerville: I’d like to be a big, fat, cat that belongs to some little old lady who feeds it fresh tuna and lazes around in the sun all day. Because honestly wouldn’t that be the life?

If you could eat one meal every day for the rest of your life what would it be?
Hot chippies with lots of salt.

What do you want to see when you go to the theatre?
That depends on what I’m going to see! But hopefully a good show? I like to see something that makes me think in a way I’ve never thought, jabs me in my heart, or a story I’ve never heard. I also really like to see kick-ass POC actors doing incredible work, and it’s something I don’t see enough.

What grabbed your attention about Slaughterhouse?
When I first read the script I felt like I was reading a good crime novel and I was trying to piece together this great mystery. I’m really looking forward to our audience having that same experience. What grabbed me though was how intelligently Felicia writes these intricate and complex characters, there’s just so much to excavate. She’s really very good, hey? And how lucky are we to be working with her words!