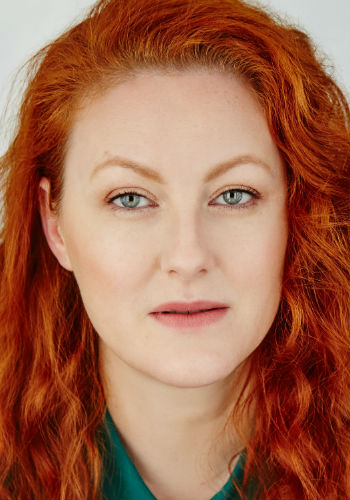 Madeleine Withington: What are you loving right now? Why?
Sonya Kerr: So many things!! Rewatching old favourite shows, trying out new recipes, working on The Angry Brigade with such an awesome cast! Haha. I’m a busy person so right now I’m actually really loving spending the small amount of time I have free hanging out with my husband.

What will always make you belly laugh?
Monty Python. I grew up watching them and no matter how many times I’ve watched Flying Circus or any of the films I still laugh like it’s the first time. The Two Ronnies also makes me laugh ridiculously hard.

Has doing this play changed or shifted your beliefs/philosophies in any way?
I don’t think it’s changed my beliefs but it has certainly made me see how anarchy can be attractive. When you feel like the system is built against you, it certainly seems like smashing against that system is the only option. I’m a big believer in the power of protest and of the people, so I think if I was around in the 70s in London I definitely would have been a supporter of The Brigade.

Does anger come easily to you?
Not really. I get disappointed, especially in relation to politics. Irritation comes easily. Lots of things irritate me, but true anger? It takes a lot for me to get really angry. I honestly can’t remember that last time I was angry. I think I’d be a member of the Mildly Irritated Brigade.

Does violence solve anything?
That’s such a hard question! While I do believe that violence begets violence, situations occur when violence is the only effective response. From something as simple as self defence to something as complex as a world war, I think the best I can say is that we should avoid violence whenever we can and exercise restraint whenever we cannot.

Sonya Kerr: What makes you angry?
Madeleine Withington: So many things. I get angry a bit too easily, I feel. There are things that are worth my anger and there are things that aren’t. I’m still learning to tell the difference. Injustice gets me, when people are disrepectful, if someone does something to hurt someone I love. I get angry at the media, and the politicians, and Australia in general, very often. Capitalism. That gets me furious. The kyriarchy. That’s a bit general, but it is probably best not to turn this into a dissertation. I got mad at the Angry Birds 2 film recently. I haven’t seen it. Just that it exists. See? Still learning. There’s so many things, I honestly don’t know if I can go into them all.

Do you believe in the power of protesting?
Yes I do. Even outside of creating change at a structural level, I think it can be very important in showing people that they aren’t alone. At the climate strike that was the feeling I had. After months and months of crumbling internally, to show up to thousands of people demanding change together, it definitely made me teary. It was weirdly nourishing? And definitely made me eager for more action on a personal level, rather than encouraging complacency. I think in that sense particularly, protest can be crucial.

What do you hope audiences will get from The Angry Brigade?
Hope and fury. Momentum. An impulse to examine their convictions? Questions for themselves. I really hope that people come away feeling a little bit uncomfortable, like there is something in the corner of their vision they don’t really want to look at, and that they then work up the courage to look at it directly. Does that make sense? If someone came out and said they weren’t sure how to feel, I’d be happy with that I think.

What brings you joy?
Again, so many things! I guess that’s a good balance? Working, I love working. I feel very joyful onstage. My partner. Drinking coffee with my partner on the weekend in our flat. My friends. My friends are incredible. Playing pool badly and having a beer and talking absolute nonsense. Writing. Being underwater, I love being underwater. Animals, any animals at all, they’re all hilarious, except for moths, not a fan of moths. Terry Pratchett books. Music. My family. Showers. Oh god, hot showers. Shower oranges. If you know, you know. I have reasonably simple joys I guess.

You play the role of Anna in The Angry Brigade. Do you identify with anything in her personality or politics?
Yes, quite a lot actually. It was her who initially drew me to the play. She is going through this very human thing of trying to align her ideas of what should be, with what “the soft animal” of her body wants. I think if you are someone who is at all given to introspection, that that is a very recognisable feeling. She also keeps questioning what “real” is, trying to keep her ideas free of influence. I mean that’s fighting a losing battle, but again, relatable. Also, destroy capitalism. The system is broken. I think Anna would be on board with that.

This #transdayofvisibility I pay tribute to the late #CarmenRupe a truly iconic figure. She lived a street away from me, when I was in Surry Hills around 2000. Always gloriously dressed, always smiling and always kind. I learned that simply living your best life in the most loving way, is sometimes the biggest, most audacious political statement.
#coronafashion #fashionfridays #highfashionathome thank you @leticiainescacerescapello, tagging @apocalypseportraits
This is a portrait of me, by my niece. It's true I'm both a unicorn and a wedding cake ❤
@mrbenjaminlaw's play #torchtheplace is in my hands, via @bookshopdarlo. I don't know if this is me spoofing @michelle.lim.davidson on the book cover, or is she making fun of me in that photo with that extra pose ❤ (3 hours hair/makeup just for the socials, is very 2020)
#nowspinning #AnitaMui #梅艷芳 a cover of #Madonna's #IntoTheGroove from the #1985 album #壊女孩. Asian music, especially #cantopop was undergoing intense colonisation at the time. We wanted Western pop sounds, but before Chinese songwriters could adapt to the market, record companies had to make lots of covers to cater to demand. Only 2 original compositions in this #LP, by a legendary artist gone too soon 💔 #suzysdiscs
#nowspinning a "new" #cantopop #RemixEP from #SandyLam #林忆莲, just 4 tracks from the mid 90s, an era when everything was only released on CD, so it's great to hear these on #vinyl for the first time. Reissues targetting #GenX consumers are big business. We struggled to find $15 back in the day to buy an album, but now think nothing of forking out $80 for just 4 songs. This disc feels worthwhile though, it's really high quality in every way. Except they've used a photo from the mid 80s, which is annoyingly incoherent. If you can hear the song playing, its title is #Determination. If you can't hear anything, it's because the music rights owner has muted it, which is stupid cos I'm like making an ad for them right here. #suzysdiscs
I've just emailed 4 theatre companies to tell them I'm regretfully not coming to see this week's openings. After thinking hard for 48 hours, I've decided that Suzy Goes See will be shutting up shop... for a bit, for the foreseeable future, for as long as is necessary. The government implies that crowds less than 500 are ok, but also recommends social distancing. I don't know how you can make sense of this, when you're sitting shoulder to shoulder with 200 people, but clearly you have to decide this for yourself for now, before stricter regulations are applied. Also, I'd like to point out that it may be 200 people one night, but after consecutive evenings, we're talking exposure to thousands in just a few weeks. Without Suzy Goes See, I may have to live a passionless existence for a while, which is scary to think about, but like many working in the arts, our need to innovate and create will simply manifest in different ways. Time will tell. Take care, of yourself, and more importantly, of others. There are people all around you who are more vulnerable than you, and they need your vigilance. Do the best you can for one another. I love you, and I'll see you on all the socials 24/7 ❤
At @old505theatre for #Distorted by @fixedfootproductions #sydney #theatre #art #blogger #artblog #artblogger
It's #openingnight at @griffintheatre for #Cusp by @atyp_theatre #sydney #theatre #art #blogger #artblog #artblogger
5 eliza st 107 projects 2013 2014 2015 2016 2017 2018 2019 2020 atyp bakehouse theatre company bell shakespeare belvoir belvoir 25a blood moon theatre bondi feast bondi pavilion theatre brevity theatre cabaret carriageworks comedy dance darlinghurst theatre co drama emu productions ensemble theatre erskineville town hall eternity playhouse griffin theatre co hayes theatre co jackrabbit theatre kings cross hotel kings cross theatre king street theatre mad march hare mardi gras 2014 montague basement musical new theatre nida parade theatres old 505 theatre old fitzroy theatre outhouse theatre co pact performance art play red line productions review roslyn packer theatre sbw stables theatre seymour-centre siren theatre co sport for jove subtlenuance sydney sydney festival sydney fringe 2013 sydney fringe 2014 sydney fringe 2015 sydney fringe 2016 sydney independent theatre company sydney lyric theatre sydney opera house sydney theatre company sydney university dramatic society tamarama rock surfers TAP Gallery theatre the depot theatre the factory theatre the genesian theatre university of sydney walsh bay wharf theatres