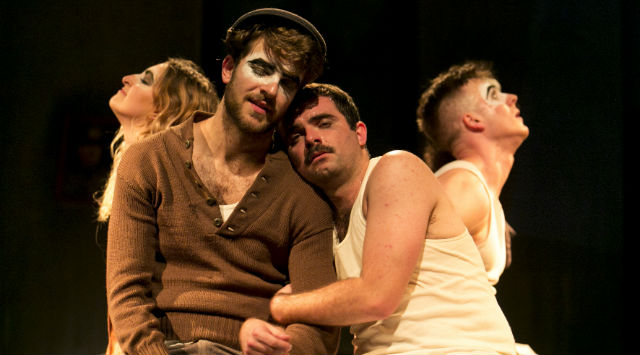 Theatre review
Set in 1940 Italy, at the height of Mussolini’s rule as Prime Minister and leader of the National Fascist Party, this version of Pinocchio sees our poor woodcarver Geppetto in his work room alone with his marionettes, trying to keep to himself, as he shuts out the ugliness of the world outside. Wordless but vivaciously animated, the show utilises techniques from the disciplines of mime, dance, music and singing, to tell a story of the individual versus the state, of the personal and the political. Our current sensitivity regarding the rise of nationalist ideologies, gives this incarnation of Pinocchio a quiet but unyielding resonance.

Its serious themes notwithstanding, this modern reiteration, directed by Julia Robertson and choreographed by Georgia Britt, is a wonderfully enchanting take on the old tale. Geppetto’s fantasy land, innocent and pure, provides the platform for a performance that appeals to our childlike sensibilities. Set and lighting designer Nick Fry manufactures a nostalgic beauty for the unusual, and enormous, venue, containing the action and our attention, with a clever understanding of space and atmosphere.

The crucial element of tenderness is brought to the stage by Mathew Lee, who shines in the role of Geppetto. His depiction of naivety allows us to see with unequivocal clarity, evil forces that try to engulf. The scene-stealing Annie Stafford displays an irrepressible presence even when playing an insentient doll, especially captivating when given an opportunity to show off her divine soprano. Harmonies in this Pinocchio are ethereal, often exquisite, performed with marvellous acoustic effect by a cast of six, inside the surprising elegance of a repurposed concrete warehouse.

We thought everything had been finalised and decided, when the fascists lost the war. Not a century has passed, and we again hear those despicable murmurs beginning to resurface, trying for a second attempt at its tyranny. There are no elongating noses in Geppetto’s studio, because this time, the lies are on the outside. The artist’s efforts to hide and disengage are futile. He is required to fight back, if his dignity is to remain intact.