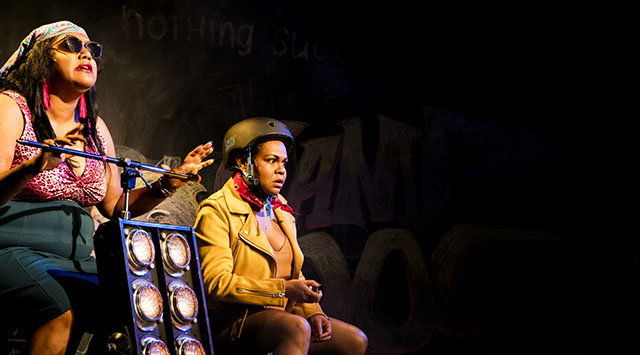 Theatre review
Barbara has a lot of fun in the city, singing at bars and events, being independent and vivacious. She is a mischievous character, and together with her cousin René, they paint the town red on the regular, determined to devour all that life has to offer, and to escape the troubling roots of their outback origins. Barbara And The Camp Dogs by Alana Valentine and Ursula Yovich, falls into categories of the musical and the epic journey, but it is a consistently surprising ride that defies all manner of expectations.

Barbara does well in life, but as an Aboriginal woman, the scars that she carries are deep, agonising and easier left ignored. When she finds herself having to return home to fulfil her filial obligations, all that she tries to deny, come flooding back to taunt her. The play expresses the nature of that immense suffering, with extraordinary acuity. Barbara and René sing, because so much of Indigenous experience is beyond our usual capacities of speech. In Barbara And The Camp Dogs, we are able to connect with the injustice and pain that have become entrenched in Black Australia. It divulges with power and wit, through its songs and storytelling, the darkest, most hidden of many Indigenous women’s lives.

It is impossible to overstate Jessica Dunn’s achievements as musical director. Barbara’s secret inner world turns intimately palpable, via influences of rock and soul, for a mode of communication sublime in its startling veracity. The songs move us as though a spiritual entity has taken hold. We are guided from scene to scene, with emotional intensity, precise and lush at every juncture.

Director Leticia Cáceres imbues the show with a warm glow, enchanting and irresistibly alluring. Everything about Barbara And The Camp Dogs is designed to have us fall in love with its characters and their narratives, and we endear to it all, readily and completely. There are occasional instances of abruptness in the transition of scenes, that can be slightly disorienting, but the raw aesthetic of the production is a forgiving one. Moreover, any blemishes would be easily shielded by the show’s incredibly charismatic stars.

The sensational voices and effervescent personalities of Ursula Yovich and Elaine Crombie win us over effortlessly, from the very beginning. The harmony forged between the two is a delight to our ears and to our hearts; what they present is wonderfully tender and exceptionally real. Yovich in particular, moves us in the most profound but unexpected ways. Telling us Barbara’s story of intolerable suffering, is not for a moment of catharsis, but a lasting gift of inspiration. We observe and learn, and promise to do better, to do more.

Barbara is not a social justice warrior. She is not a conscious activist, but she has to fight every day of her life, to defend herself against structural forces determined to keep her down. Australia’s shameful history of genocide, originating from the illegitimate claim of terra nullius in 1788, has reverberations that remain cruel and potent in the twenty-first century. A semblance of equality is not sufficient to heal these dreadfully severe wounds. Meaningful reparations will cost, but they must be made.