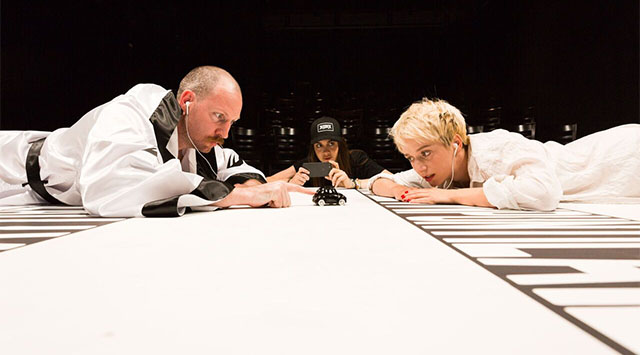 Theatre review
We are told that the show’s departure point is Brecht’s 1940 script Mr Puntila And His Man Matti, but not much else can be certain in anyone’s reading of Tobias Manderson-Galvin’s Puntila Matti. Its deliberately bewildering enactment of a chaotic aesthetic, places us in a theatre that is less about stories, and more about experience and experiment, with time as a foregrounded instrument of its artistic practice. We look at a juxtaposition of bodies within time (and space) to garner meaning from any work of theatre, and in the case of Puntila Matti, we are challenged to find a way to appreciate and to comprehend all the riotous action, when its creators intentions seem to be to obfuscate the original narratives on which the show is built.

Manderson-Galvin acknowledges the European history so intimately entangled in the Western art of Australia. If Bertolt Brecht is present in every official form of theatre education disseminated on our land, then this relationship we endure, with a distant past from a faraway region, has to be interrogated. We can try to ignore old Europe’s stifling domination, and pretend to create new voices that are transparently offshoots of that heritage, or we can examine it with irreverence and subversion, as is done in Puntila Matti. Manderson-Galvin reframes Brecht in his own words, then makes them distorted and unintelligible, almost Dadaist in style. This is not a play about dependable dialogue and consistent characters. It is about the establishment, and how we can confront it.

The centrepiece is Manderson-Galvin himself, an imposing figure, wildly energetic and disarmingly intuitive as live performer. A fearlessness in his approach provides assurance of a man in charge, but it also keeps us on our toes, compelled and vigilant in the absence of the fourth wall convention. Grace Lauer provides a sense of anchor to proceedings, a necessary counterbalance that gives texture and dynamism to the presentation. Antoinette Barboutis is on the periphery, playing disoriented narrator with remarkable comedy, consistently, and delightfully, stealing the show from under the key performers.

When we come to recognise the bad in our inheritance, the brave will seek reparation. If our art is broken, it only makes sense that the most innovative of us, will attempt to find solutions. Reacting to the racist, sexist, homophobic, classist (you get the drift) systems in which we have to operate, requires that all participants, practitioners as well as audiences, must learn to face up to the new. It will be awkward, perplexing, even distressing, but those are sensations inherent in any true and radical emancipation. We may never be able to entirely abandon the past, but in rejecting the familiar and the comforting, we know that a genuine progression is in process.