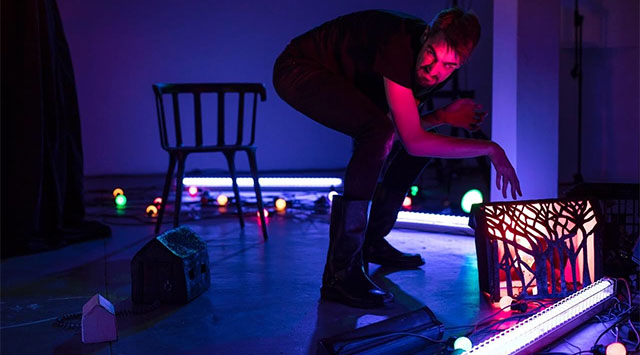 Theatre review
Tom Christophersen has a fascination for the paranormal, and in Business Unfinished, we gather around him as though around a campfire, listening to ghost stories that he has amassed. A collector of metaphysical tales, the idiosyncratic obsession that Christophersen presents, is something we relate to, for what he does in the show, is to question a reality of which everyone is implicated.

Believable or not, depending on each of our own constitutions, episodes in Business Unfinished are an inviting exploration into the nature of time and space, as well as an examination of the human tendency to create relationships with the supernatural, religious or otherwise. It then extends into the idea of sanity, and that sense of coherence necessary for the world to exist as an understandable, rational whole. An acceptance of incoherence would suggest that phenomena is beyond all human control, and therefore devastating.

Christophersen’s work on soundtrack is outstanding; blending firsthand accounts with an imaginative selection of music and a broad assortment of effects and clips, what we hear is deeply evocative, and a thorough expression of the creator’s unbridled fascination for the subject. Sound design however, is underwhelming, with two basic speakers behind the stage unable to manufacture appropriate sensations that would trigger our more visceral responses. Christophersen performs a substantial portion of the show as a lip-sync act, mouthing to recordings of various personalities, with astonishing accuracy. Stage manager Patrick Howard’s precision in dispensing cues is noteworthy in this regard.

Lighting design by Alexander Berlage is charming and playful, offering a good level of visual excitement to the piece. The space is problematic, being right next door to a rowdy watering hole, and the production insufficiently compensates for noise, leaving atmosphere severely compromised, in a work that is all about things creepy and ominous. Nonetheless, it is unequivocal that what its innovative director James Dalton delivers, is a rich and artful theatre, one that is as interested in its subject matter as it is in the characteristics of theatre itself.

Live performances comprise both the concrete and the esoteric. We go to them in search of magic, trusting that although the flesh and matter we encounter are essentially ordinary, something beyond the mundane will be experienced. If ghosts can be created on stage, we can make them appear in other places, voluntarily or involuntarily. As with gods, we can only prove their non-existence, but their presence is resolutely persistent, and ultimately ineludible.