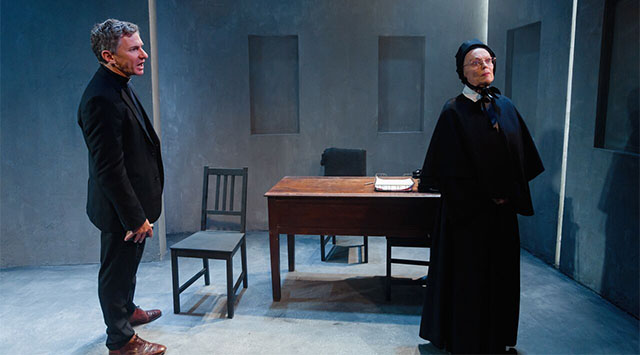 Theatre review
John Patrick Shanley’s genius masterpiece, Doubt: A Parable takes a deep and extensive look at the nature of doubt, and through it, reaches for something fundamentally real about who we are. Its greater power however, lies in its narrative. It is the literal rather than the allegorical that many will find affecting in the play, with the ongoing predicament of paedophile priests in our churches never seeming to find satisfying resolution.

Sister Aloysious possesses no concrete evidence of Father Flynn’s trespasses, but her position as school principal requires that students are protected at all cost. Operating under severely defective systems of patriarchy and the clergy, Aloysious can only do the right thing by dehumanising herself in order that she may be able to undertake necessary measures, “in the pursuit of wrongdoing, one steps away from God.”

This sensitive interpretation by director Dino Dimitriadis pulls close focus to Shanley’s words, with theatrical devices kept at an intentional quiet, so that we garner maximum impact from the extraordinary writing. Design aspects are minimal and unobtrusive, but elegantly effective.

Performed with great detail by an impassioned cast of four, we are offered a marvellous intensity of interplay between characters that could only emerge from exhaustive study and immersion into the text. Belinda Giblin is stunning as Aloysious, psychologically meticulous and emotionally complex, she gives us crystal clear insight into the personality being presented, while providing astute access to the unusual world in which she resides. A wealth of meanings are implied in Shanley’s dialogue, and Giblin makes certain that we receive them all.

Father Flynn’s uncompromising ambiguity is the show’s dramatic lynch pin, brilliantly manufactured by Damian de Montemas whose hints of malice keeps us engrossed and on edge, even if he does sound uncomfortable in his American accent. The magnetic Charmaine Bingwa leaves a strong impression in a singular pivotal scene, embodying Mrs Muller’s specificity of time and space with a remarkable authenticity of presence. Matilda Ridgway is a quirky Sister James, veering slightly too far from naturalism, but whose interpretations are unquestionably entertaining.

We watch these people participate in a religion that has overwhelmed their lives, and wonder if Catholicism takes more than it gives. We see the destruction it causes, and are suspicious of the way it claims to be of benefit to these individuals. We also see the inextricability of religion, and the difficulty of achieving emancipation from its indoctrination. As our nation continues to wage war against “radical Islam”, rapists in our Catholic and Christian churches are allowed to fester year after year. We hear about investigations and inquisitions taking place every day but they deliver little, while our children face dangers that are constant, secretive and insidious. Sister Aloysious does the best she can, but knows that it is not yet enough.