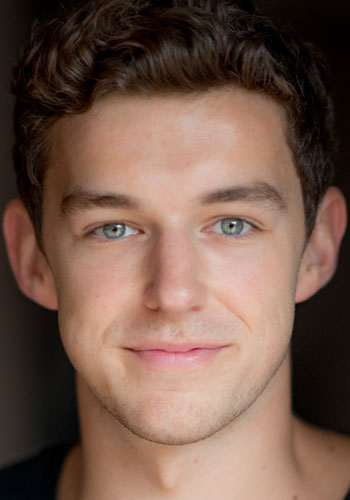 Emily Havea: So you’ve got quite a doozy of a role to play here Sky! Anyone who knows you personally would know that you’re about as far from an aggressively masculine ‘alpha-male dickhead’ as I am! How have you found playing Alex?
Skyler Ellis: Yeah, it’s a toughie, to say the least! Look, it’s easy to see a character described as ‘hyper-masculine d*ckhead’ and play it as ‘bogan, testosterone-filled mofo that drinks too much and starts punching the nearest person’. But that is not only judgemental towards him, but also dismissive of a lot of other information about him provided in the play. After a while of exploring Alex like that, I had an extremely insightful conversation one rehearsal with our wonderful director, Erin, which made me question everything about him, including why I, as an actor, was cast as him, and what I offer naturally as a person. It made me realise that I have much more in common with him than I anticipated. The ‘hyper-masculine’ stuff is very different in a UK context, than it is through an ‘Australian’ lens, and I hadn’t taken that into consideration. He’s “posh”, he’s a banker and he’s a business man, too. It’s these kind of seismic revelations about him that make him SO fun to experiment with. It’s challenging to constantly be questioning his existence within a harshly capitalist society, but boy is it fun!

Classic drama school character question; Are they nice or nasty? (thanks Jen Hagen) What do you think about Alex?
Well, if any character is just one or the other, they’d be pretty bloody boring to watch! It’s much more interesting to see a character’s imperfections and inconsistencies, right? If at one point, Alex was to appear ‘nasty’, it makes you question your own judgement of someone who is going through a pretty traumatic situation. It could be a coping mechanism of someone in pain. NOW who’s being nasty! Sure, I think Alex approaches situations differently than I would, but I think finding his heart, is the key.

As we all know, indi theatre is a love job! It doesn’t exactly pay the big bucks haha. What was it about this play that made you wanna jump on board?
Oh, wait, you’re not getting paid equity rates for this show? Awkward… Jokes! The whole conversation about the appreciation (or lack thereof) of arts within our society and the expectation of artists (in most mediums) to do their profession for the love of it, is a conversation for another time. For BU21, as soon as I read the script before auditioning, I knew I wanted to be a part of it. All it takes is a quick scroll of Facebook to be hit with the repercussions of living in a world dominated by fear, and I really think Stuart Slade tackles this in his work. It’s a tough world to live in right now, especially if you believe in having respect and love for fellow humans. BU21 addresses the mechanism of coping, of hope, and of human decency in an unimaginable situation, and I think that can resonate with a lot of us right now.

If you had to summarise/ describe the show in 3 words, what would they be?
“Onwards and upwards.”

Skyler Ellis: BU21 has some pretty hectic content, but also calls upon humour and lightness. How have you found it, having to insert yourself into an unimaginable situation to convey your character, Thalissa, with truth?
I mean, you’re absolutely right. It is truly graphic and unimaginable stuff we’re dealing with so there has to be an element of self-preservation for the actor whilst still playing for truth. I think that lightness and humour that our director Erin has pushed for is what gets us all through and stops the play from being a relentless gut-wrencher. Also having a great, supportive and fun bunch of cast members helps! The humour and camaraderie offstage is equally as necessary as it is onstage. It just pops that tension bubble and let’s us all off the trauma hook for a second. After all ‘If you laugh at it you can fucking beat it, you know.’

Along with being a wonderfully gifted actor, you’re also a damn fine dancer, an angelic vocalist, and a very talented painter and drawer. You’re artistic, to say the least! Why are these different artistic fields important forms of expression to you, and do they influence your acting in any way?
Oh my gosh Sky stahhhhp! You’re like a human personification of my Showcast! Great question too. I definitely think I’m lucky to have a number of creative outlets to express myself through and although they all come from the same place (me, der) I do wonder if they speak to each other.. Acting and dance seems like an obvious one as inhabiting a character is as much an embodied thing for me as a mental thing. I’m one of those actors who likes to have their character’s shoes so I can feel what it’s like to walk like them and that definitely comes from my dance background. But I guess at the end of the day it’s all storytelling isn’t it? Singing, dancing, acting, writing, drawing -they’re all just ways for me to express something and I’d be a sadder person if I didn’t constantly get it out.

What has been your favourite memory from rehearsals so far?
My favourite rehearsal was just the other day when we got to sit and watch everyone’s monologues! I don’t think I’m giving anything away by saying, it’s a monologue heavy show -which is a whole other challenge. But it was so nice to be able to watch everyone’s work cos there’s some REALLY great acting going on. Every time I’m in a show, I always wish I could just sit out and watch it for a run and, because of the monologue style, it was finally kinda possible!

The original UK production of BU21 has just been transferred to the West End. The play has had a successful run in Spain, is opening later this year in Germany, and we are premiering it here in Australia. Why do you think it is so relevant now, in 2017?
I don’t think this play could be more relevant if it tried. One of Thalissa’s lines sums it up best for me; “You know how on the news these days there’s just this endless stream of horrendous shit going down, like every single night? Suicide bombings, mass shootings, genocide, drone strikes, school massacres -It’s like the end of the world or something.” You don’t have to scroll very far to know that to be true! Stuart Slade has written a beautifully detailed, raw account of people dealing with some of today’s atrocities head on. Terrorism is a huge collective fear of society today and I think Slade does an incredible job of confronting that and pulling it apart with all its complexities.

F*ck, marry, kill. BU21 characters. Go!
Hahaha! It’s year 10 all over again! Ok here we go… so I’d fuck Clive because he has that whole monologue about love so he’d probably be a generous lover. Marry is a hard one…. You know I might marry Ana! I could use a sensible Romanian woman to keep me on the straight and narrow. Annnnd I’d kill Graham (sorry Jeremy). Straight up. I won’t reveal any spoilers but Graham and I have some moral differences so I wouldn’t feel too bad about killing him.

@wazzaandrew and I agree that @venenolaserie on @abctv is this year's best! Join the chat Tuesdays on @joy949drive
New addition to my "wall of fame", remember to catch @venenolaserie on @abctv #iview, it's beyond beyond ❤
Booked myself in to see a show 26th Oct @hayestheatre... 4 months after the last bit of theatre. It's exciting, but also a bit scary.
I've just heard that #ChrisHo has succumbed to cancer. I'm not one to think of death as a necessarily bad thing, and for a great person like Chris, who has done so much as a rebel and agitator for ultra conservative Singapore, I tend to believe that death is a sort of reward for those who are too good for this earth. Of course we would benefit from having him stick around for a little while longer, but I can only imagine the exhilaration Chris is experiencing right now, as he approaches those pearly gates, finally seeing the paradise he had talked about all this life.
#nowspinning @ngaiire #vinyl
Also made a nice connection with @Eugyeene Teh after admiring his work for many years ❤ thanks again to @diversityartsau and @audreyjournal read up on it at audreyjournal.com.au
On behalf of @diversityartsau I spoke with several artists about their work during lockdown... check out my close friend @cat.vandavies (AD at @redline__productions and actor), who shares her thoughts about making art during these challenging times! Thanks to @audreyjournal for publishing the piece ❤ see it at audreyjournal.com
It's been 1 year of Suzy talking shit on @joy949drive, cannot believe it ❤ thank you @studiomason_ @wazzaandrew @joy949 for allowing me to serve the community
5 eliza st 107 projects 2013 2014 2015 2016 2017 2018 2019 2020 2021 atyp bakehouse theatre company bell shakespeare belvoir belvoir 25a blood moon theatre bondi feast bondi pavilion theatre brevity theatre cabaret carriageworks comedy dance darlinghurst theatre co drama emu productions ensemble theatre erskineville town hall eternity playhouse griffin theatre co hayes theatre co jackrabbit theatre kings cross hotel kings cross theatre king street theatre mad march hare mardi gras 2014 montague basement musical new theatre nida parade theatres old 505 theatre old fitzroy theatre outhouse theatre co pact performance art play red line productions review roslyn packer theatre sbw stables theatre seymour-centre siren theatre co sport for jove subtlenuance sydney sydney festival sydney fringe 2013 sydney fringe 2014 sydney fringe 2015 sydney fringe 2016 sydney independent theatre company sydney lyric theatre sydney opera house sydney theatre company sydney university dramatic society TAP Gallery theatre the depot theatre the factory theatre the genesian theatre university of sydney walsh bay wharf theatres