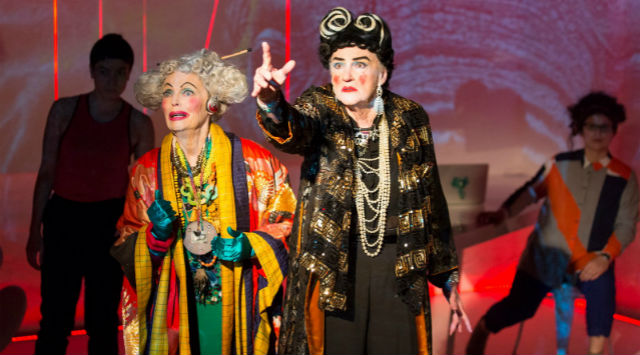 Theatre review
The Turquoise Elephant takes place some time in the not so distant future. Temperatures in Sydney have gone up to 48 degrees, and people are still squabbling about how to, and whether to, fix climate change. The right and left wings of politics have gone completely extreme with their demands, allowing nothing to be achieved, and all the common person can do is either to take to the streets in inconsequential protest, or wallow in non-action.

Stephen Carleton’s writing is pessimistic, but also very funny. Madcap characters and outrageous dialogue make the play drip with irony, as it shows us ugly amplified visions of how we are today, as we fail at addressing environmental problems that are already prevalent. The plot is a simple one, by nature of its characters’ stagnation and inability to do anything useful, The Turquoise Elephant does not develop very far story-wise. Director Gale Edwards does spectacular work with her show’s comedy, highly effective in its flamboyant commedia dell’arte influenced approach, but scenes begin to feel repetitious toward the bitter end. The gravity of the play’s core message does not take hold with great vigour, although that could well be a result of the undeniable apathy that we are being accused of.

Actor Belinda Giblin is remarkably vivid in her portrayal of Olympia, the disaster tourist who takes perverse pleasure in witnessing the annihilation of our planet. Giblin is tenaciously larger than life, enthralling even when her character is asleep, making us laugh whether the material is broad or obscure. The cast is hugely charismatic, and uniformly enjoyable. Also remarkable is the production’s visual elements. Emma Vine’s wonderfully wild costumes inject a vibrant, deliciously sinister edge, while Brian Thomson’s set and Verity Hampson’s lights effectively depict decadent wealth with fantastic imagination and marvellous ingenuity.

Our climate calamity is news to no one. If the play says anything useful at all, it is that our habitual social divisiveness can be as destructive as the weather we fight about. As communities become increasingly accepting of class conflicts that come with drastically unequal wealth distribution and fanatical political polarities, we will be less and less likely to know how to solve problems. A lack of social cohesion may not be as dramatic an idea as glaciers melting or islands disappearing under water, but the danger it poses is no less serious.