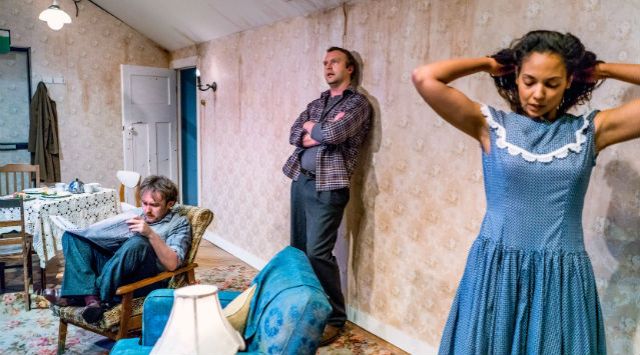 Theatre review
Jimmy is a very angry young man, and in Look Back In Anger, we are subjected to a series of his incessant, long and very tedious rants that prove themselves to be ultimately ineffectual, and highly irritating. At one point, he insists “that voice that cries out doesn’t have to be a weakling’s does it?”

1956 it seems, was a completely different time. Today, a white man with youth and a university education, living in a Western society, is considered to be in possession of the greatest of privileges, and we have no patience for their complaints about their perceived (and possibly, imagined) injustices of life. Of course, residing in positions of advantage does not automatically absolve a person of angst and self-proclaimed victimhood. Jimmy’s grief with our troubled existence is valid, and it is his right to refuse to suck it up, grin and bear it, but like all the furious white male voices that rule the talk-back radio waves, we can choose to ignore their shrill babble. John Osborne’s play is well structured, but its themes and concerns could not be more dated, and for many feminists, not much is lost if Look Back In Anger, along with its overt misogyny, is left dead, buried and cremated.

From a technical perspective however, co-directors Damien Ryan and Lizzie Schebesta have revived the play with admirable accuracy and nuance, delivering powerful drama, especially to those more welcoming of its ethos. Also accomplished are its designers; Jonathan Hindmarsh’s set and Anna Gardiner’s costumes add meaningful, dynamic touches to the look of the piece, thoughtfully utilising the space’s intimacy to provide a vibrant immediacy to the experience.

The cast is uniformly strong, with each actor contributing impressive depth in their characterisations of less than inspiring personalities. Osborne’s dialogue is provocative (to say the least), and his lines are given tremendous fervour by an ensemble insistent on winning us over. Andrew Henry is at his bombastic best as Jimmy, with a portrayal so passionate and convincing that we struggle to detach our dislike for the character from what is actually an excellent performance by the leading man. Henry finds scintillating chemistry with each of his co-stars, and it must be said that every scene is captivating, but also undeniably excruciating for audiences less tolerant of its turgid drivel.

Like many works of art (good or bad) that cause exasperation, Look Back In Anger will spark discussion. In its time, the work was relevant for its interest in class consciousness and issues of poverty, but these ideas have evolved into something that is now inseparable from contexts of race and gender. In the past, audiences were able to understand the world from Jimmy’s perspective, but today, the world turns the tables and puts him under scrutiny. We are made to look at anxieties of the white man, but his anger scarcely raises a brow. Perhaps it is only himself who could possibly benefit from wallowing in that distorted and narcissistic reflection.