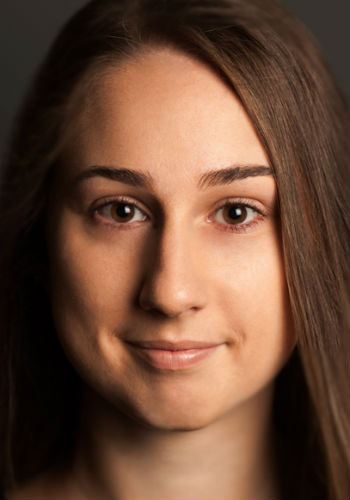 Lucy Quill: If you chose to retreat from the world and the people in your life as Cristina in Cristina In The Cupboard does, where would you go and why?
If I wanted to go on a holiday anywhere in the world I might pick some place exotic like Brazil, somewhere romantic like Paris or somewhere with an amazing arts industry like Berlin. I suppose however if I truly wanted to retreat, to get away from everything and everyone, I’d pick some place secluded where I could gather my thoughts and not be distracted by everything the world throws in our way. Some place like Fowler’s Gap which is past Broken Hill in rural NSW. I went there for a week last year and was overcome by the sense of freedom due to the complete isolation. No technology. No stress. Just the stars – the real stars – above you and untouched nature surrounding you.

What’s your favourite trait of your character Belinda and why?
Belinda’s confidence and resilience. Others might see it as cockiness, and contextually it might often be the case, but to her credit she truly believes in what she says and she’ll fight with you until you agree with her. She always makes the best out of the worst situations. If there’s a way she can come out as the hero she will! She might be a bit of a one-upper but I think deep down it’s just a coping mechanism she uses to feel connected to everyone, anyone.

What message have you personally taken away from exploring the Cristina In The Cupboard script?
There are a lot of messages I’ve taken from this script and I mean that sincerely. Cristina In The Cupboard is such a universal story about human connection and the similarities within our differences. For me one of the big messages is that even if you give up on the world and yourself, there will always be people in your life that never give up on you and that might frustrate you as it does Cristina, but you can’t help the way other people feel about you. Another message is that life sucks – but that’s ok! It may be clichéd but you have to take the bad with the good because without it you just can’t appreciate how good it really is. With ups there are downs, but with fear comes joy.

What’s your favourite holiday memory?
My first trip overseas. I went to visit my friend who had moved to New Zealand. I was welcomed by his family into their home and they were so excited about making sure I had the best time! We did a mini road-trip around the South Island, we did the touristy things like Milford Sound, but we also would just drive and randomly stop to see the hidden gems like when we got up early, drove in our pjs and ate breakfast at some lookout where some bikies asked us to take their photo. We stayed at great hostels, we stayed at awful hostels, and it just made the trip more memorable.

What is one of the most bizarre things you’ve experienced?
Bizarre…that’s a tricky one. Probably the looks on people’s faces when a bunch of us were trying to do deep and meaningful acting exercises as part of a uni excursion in the middle of Taronga Zoo. Especially when it was often silent and we were just using facial expressions. We must’ve looked like the biggest bunch of weirdos. I definitely saw some parents physically holding their kids back.

Tasha O’Brien: What do you think makes Cristina In The Cupboard unique so that people shouldn’t miss out on seeing it?
Lucy Quill: Cristina In The Cupboard is such a unique piece of work because it’s creating a magical world that is Cristina’s mind, where time, thoughts and memories are all skewed, yet there’s something extremely real and relatable about her projections. The experiences and feelings that Cristina is projecting in her mind are things that we’ve all gone through as humans, and it lets you feel like you’re actually normal and like you have a place in the world because you’re clearly not the only one who has had these experiences, and that’s what makes this play so enthralling and hilarious.

What are the similarities between yourself and your character Erica?
Oh geez I hope I’m not TOO similar to Erica! She means well, bless her, but she’d be quite taxing to be around! In saying that, I love her for her faults, which no doubt she sees as extremely endearing qualities. Erica genuinely feels she knows what’s best for everyone in every situation. She’s got an answer for everything and relates to anything you’ve ever been through. If you’re going through a break up, she totally gets it because she broke up with a boy when she was 14 and she felt sad too, probably a bit sadder than you actually. If you have a cold, she has the flu etc., etc… I think we all have a tendency to do that. We want to relate to people and their experiences and we want to be heard and validated, sometimes as the cost of hearing someone else and validating them! I know that if someone is telling a cool story, I’m trying to think of a similar experience that I’ve had so I can jump in when they finish and say ‘That’s like the time I…’. I think it’s human nature to do this and while Erica demonstrates this in an extreme way, this is where I can empathise with her and relate to her the most.

This is your first theatre performance in two years, has the role been what you were hoping for?
Yes, it has been. It’s been such a blast playing Erica, and it’s also been a massive challenge and learning experience. Portraying Erica in the hyperbolic way that she’s been written, whilst still capturing her authenticity has been a challenge that I didn’t initially expect I would come across. I was a little surprised by how complex it’s been to play a comedic role, but it’s something that I’ve loved tackling. I set out to challenge myself when I auditioned for Cristina In The Cupboard, so I’m extremely grateful that this role has given me the opportunity to do that as I’ve learnt so much and feel like I’ve achieved a lot.

How old were you when you had your first kiss?
I was 13 and it was at an underage rage that we all used to go to every Friday night called ‘Redz’. I was wearing low-ride, bootleg jeans with a classic Supré slogan tee that let everyone know that I was a ‘Hustler’, in case they hadn’t realised already. I was cutting shapes on the dance floor to ‘Lose Yourself’ by Eminem and a boy called Greg started dancing with me. He was from another school so I didn’t know him that well but when he leaned down to kiss me I took the opportunity because my friend Abbie had already kissed like three guys in her lifetime. It wasn’t romantic and it was totally gross but I was so happy to have had my first kiss.

Have you travelled to any out of the way places and/or have any interesting travel stories?
I was on an island in the Caribbean with my family and we were doing a bus tour with about 20 other people. The tour guide drove us up to the top a cliff so we could see the point where the Caribbean Sea meets the North Atlantic Ocean. He pulled up and hopped out of the bus and we followed. My sister and my dad had gotten out of the bus, but mum and I were still in there when the bus started rolling back towards the edge of the cliff because the tour guide forgot to put the handbrake on! Just a minor oversight! We all started screaming and pushing each other towards the door and luckily the driver managed to jump in and pull the handbrake in time to save us from going A over T over the cliff. #gratefultobealive

Tasha O’Brien and Lucy Quill are appearing in Cristina In The Cupboard by Paul Gilchrist.
Dates: 13 – 30 July, 2016
Venue: The Depot Theatre

@wazzaandrew and I agree that @venenolaserie on @abctv is this year's best! Join the chat Tuesdays on @joy949drive
New addition to my "wall of fame", remember to catch @venenolaserie on @abctv #iview, it's beyond beyond ❤
Booked myself in to see a show 26th Oct @hayestheatre... 4 months after the last bit of theatre. It's exciting, but also a bit scary.
I've just heard that #ChrisHo has succumbed to cancer. I'm not one to think of death as a necessarily bad thing, and for a great person like Chris, who has done so much as a rebel and agitator for ultra conservative Singapore, I tend to believe that death is a sort of reward for those who are too good for this earth. Of course we would benefit from having him stick around for a little while longer, but I can only imagine the exhilaration Chris is experiencing right now, as he approaches those pearly gates, finally seeing the paradise he had talked about all this life.
#nowspinning @ngaiire #vinyl
Also made a nice connection with @Eugyeene Teh after admiring his work for many years ❤ thanks again to @diversityartsau and @audreyjournal read up on it at audreyjournal.com.au
On behalf of @diversityartsau I spoke with several artists about their work during lockdown... check out my close friend @cat.vandavies (AD at @redline__productions and actor), who shares her thoughts about making art during these challenging times! Thanks to @audreyjournal for publishing the piece ❤ see it at audreyjournal.com
It's been 1 year of Suzy talking shit on @joy949drive, cannot believe it ❤ thank you @studiomason_ @wazzaandrew @joy949 for allowing me to serve the community
5 eliza st 107 projects 2013 2014 2015 2016 2017 2018 2019 2020 2021 atyp bakehouse theatre company bell shakespeare belvoir belvoir 25a blood moon theatre bondi feast bondi pavilion theatre brevity theatre cabaret carriageworks comedy dance darlinghurst theatre co drama emu productions ensemble theatre erskineville town hall eternity playhouse griffin theatre co hayes theatre co jackrabbit theatre kings cross hotel kings cross theatre king street theatre mad march hare mardi gras 2014 montague basement musical new theatre nida parade theatres old 505 theatre old fitzroy theatre outhouse theatre co pact performance art play red line productions review roslyn packer theatre sbw stables theatre seymour-centre siren theatre co sport for jove subtlenuance sydney sydney festival sydney fringe 2013 sydney fringe 2014 sydney fringe 2015 sydney fringe 2016 sydney independent theatre company sydney lyric theatre sydney opera house sydney theatre company sydney university dramatic society TAP Gallery theatre the depot theatre the factory theatre the genesian theatre university of sydney walsh bay wharf theatres