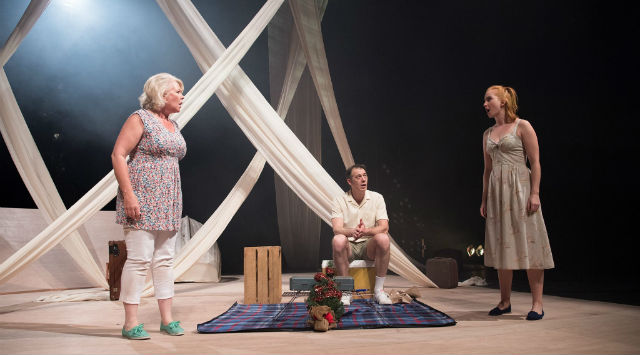 Theatre review
Michael Gow’s Away is about ordinary lives and their hidden struggles. The action takes place in 1967 Australia, but the problems faced by its characters are of a personal nature and therefore eternal in their resonance. Social turbulence evolves with each era, and although we think of the world as being a different place with different challenges through time, Gow’s play demonstrates the constancy of our inner struggles. We can imagine ourselves existing in any period, but human mortality is the basis of how we conceive of ourselves; the awareness of death’s inevitability tells us what we want from each day and what we wish to leave behind.

Away is not essentially of an operatic scale, and its many intimate qualities are lost in the very vast theatre space. The production is attractively designed, sleek and refreshing in its simplicity, but the set has an asymmetry that causes the play to project to approximately two-thirds of the auditorium, leaving remaining seats cold. Direction is similarly negligent of this spacial imbalance. Actor Sarah Woods is a clear stand out for her deliberately exaggerated performance, gripping the audience with an over-the-top entrance, and keeping us engaged with her dramatic flourishes as her character Gwen proceeds to reveal her surprising complexities.

The text has an interest in the dark and messy sides of life but the show has a sterility that disconnects from its intentions. The story might be conveyed well to the better seats in the house, but its message is not delivered with sufficient power. We congregate at the theatre to listen, and those on stage have the responsibility to reach out to all who have made the effort to participate. The room can be packed full through commercial brilliance, but the night proves to be fruitless if people leave with emptiness.