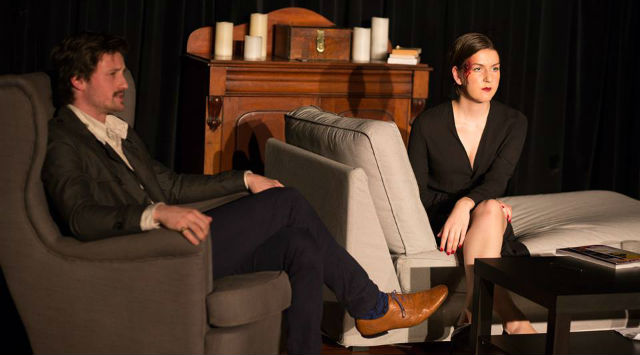 Theatre review
In Zach Beavon-Collin’s Hedda After Hedda Gabler, actors and characters try to escape their fates. Henrik Ibsen’s Hedda Gabler is one of the Western world’s most celebrated plays, performed and read the world over every day, with its shocking ending repeated on every occasion. Its characters are miserable, and the playwright’s message is bleak, so it makes good sense to want to formulate a rescue plan that holds brighter promise. Beavon-Collin explores the tension between circumstance and consequence in his radical retelling, along with a fluctuating adherence to the original that negotiates the very nature of adaptation. His script is a charming one, but requires of its viewers a familiarity with Ibsen’s version or not much will make sense. It is an interesting dialogue, with only one side presented.

Staging of the work lacks refinement, but there is a quirky flair that holds the piece together. Performances are mostly adequate, although the greenness of its players is evident. Alice Birbara plays Hedda with excellent concentration, but the intensity of her interpretation communicates little. The actor seems to work hard at the psychology of her role, but not enough is being articulated in her overly introspective approach. Chemistry between actors is mild and hesitant, resulting in a show that offers little beyond artifice and concepts. There are strong passions and wild exploits in the text, but their resonances remain buried.

If we believe that all life is predestined, each with its own inevitable conclusion, then depression could be the only response. Hedda is deeply troubled, but in this rendition, we see her attempting to re-write her fate. The notion of a great heroine fighting for survival is a powerful one, and the uncertainty of her aftermath is equally seductive.