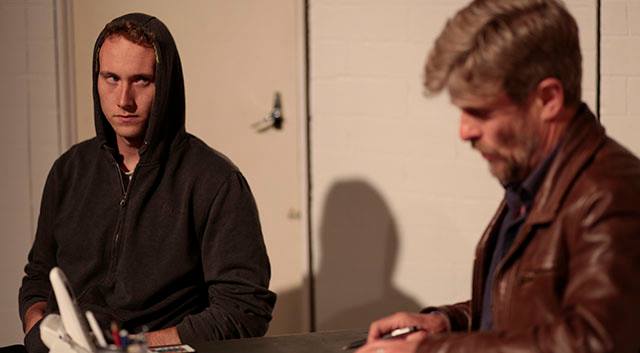 Theatre review
One of the things about gender is that we make the quality of vulnerability inaccessible to the sterner sex. Damage to mind, body and soul follow, all of which are hard to unravel. Peter-William Jamieson’s Retrograde looks at two men, through a series of psychotherapy sessions, to explore the hardened emotional landscapes that reside in half of our population. Both characters are realistically drawn out. They are familiar archetypes, a young criminal and a semi-retired counsellor, who we investigate at depth, as the play ventures to bring illumination to the mystery behind the often impenetrable surfaces maintained by the male of our species. The writing is straightforward, with clear intentions, but its style is simple and sometimes too obvious. The narratives are dramatic, but the plot’s predictability prevents intrigue from taking hold. There is a sensitivity to the way each scene unfolds, as more of the characters are being revealed, but none of it is surprising. We feel one step ahead of the game, and resist the tension that the production tries to build.

Michael Yore’s direction is faithful to the directness in Jamieson’s writing. There are few embellishments, except for the frequent use of video footage that is a key and clever component to the play. Unfortunately however, the poor quality of projected images prevents us from engaging sufficiently with the performance therein. Mark Lee does splendid work as Earl, the older and wiser of the two, but who struggles with addiction and an unresolved past. The actor is powerfully present and accurately detailed in his portrayal. His work is consistent and sharply focused, and is the unequivocal highlight of the production. Playwright Jamieson is cast as the wayward Sonny, a young man trying to escape the remains of a bruised childhood. His performance is committed and studied, but too restrained and not always believable. The voice and physicality that he creates does not match our imagination and experience of that personality type, and some of his depictions of emotion require greater authenticity, in order that we may identify more closely with Sonny’s plight.

The themes in Retrograde are valuable points of discussion. Problems associated with our obsession with masculinity are pervasive, and the importance of articulating and dealing with them cannot be understated. We need to redefine socially, what it is to be a man, so that we can identify truer virtues and shift prominence to them. Silence in the play is a cancer, a force that destroys individuals and relationships, and it is the opposite of that silence that can heal us all.