Word on the street is that you’re the cast go to for baked goods. What kind of tasty treats have you been whipping up through rehearsals?
Thanks James. That’s correct. I have been baking a lot. I like to make bliss balls, which you’ve named “Clairy Balls”. Cheers for that. I also like to experiment with making these whacky granola bars… I’ll throw in all sorts of crazy ingredients in a pot and then I’ll press it into a tin and fob it off as a slice of sorts. It’s a well-known fact that I’m what Jerry Springer would call “a feeder”.

Tell us about Mazzy Star, Hooters and panic attacks in the condiments aisle?
Ah, you mean how I like to procrastinate by conducting extended improvisations in character? So to “try” heroin, I listened to Mazzy Star (heroin music, apparently) for three hours lying on a furry blanket. It went well, thanks for asking. For a white trash American dining experience we went to Hooters of Parramatta in costume and ate buffalo shrimp and drank Budweiser beers. It went well, thanks for asking. I also did a food shop in character. Sharon is “crazy broke” but that doesn’t stop her from trying to host a barbeque for the neighbours. So I went to Coles in costume with Sharon’s shopping list and set an appropriate budget and went through aisle by aisle putting everything in my trolley for her dinner. By the time I got to the mustards Sharon had no money left and was crouched under the trolley having a panic attack. So yeah, it went well, thanks for asking.

You saw Detroit at the National Theatre in London. Tell us about that and how you then felt being cast in the Australian premiere.
Yes, I saw Detroit back in 2012 when I was in London. I was blown away by the naturalism of Lisa D’Amour’s writing and the detailed complexity of the characters. I also remember thinking that Sharon would be a great role to play. She’s hilarious, a dreamer, an idealist, but also so vulnerable; we meet her at a pivotal time in her life where things could go either way for her. She’s in a dangerous place in her addiction recovery and a danger to herself and others. An opportunity to work on that range of material in one role doesn’t come along for actors all that often. So you can imagine my utter delight that three years after first seeing the production I have the privilege of playing her in the Australian première. No pressure.

Favourite line in the play?
There’s a moment in the play where there’s a silence and then Sharon starts singing “Don’t stop believing” to everyone but she gets the words wrong. I’m enjoying it far too much and expecting a cut back note any day now. 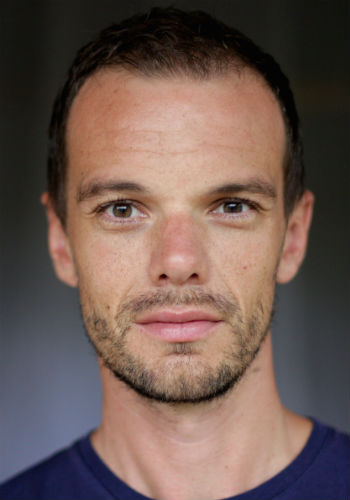 Claire Lovering: Your character Kenny talks about Strawberry Shortcake. Do you like biscuits? If so, have you been happy with the selection provided so far?
James O’Connell: When I hear Strawberry Shortcake my mind goes straight to the 80’s toys and cartoons. I think Kenny was a secret Strawberry Shortcake fan and maybe even kept a doll under his bed though he’d never admit it. I love biscuits. I devoured the cast rehearsal allocation and then some. The selection was good – you can’t go wrong with assorted creams, but I’m hoping the in-season selection might step up a bit. Wouldn’t it be great to do a show sponsored by the Byron Bay Cookie Co? More white choc and macadamias than I’d know what do with!

I hear you’ve quit sugar. How’s that going for you?
Great follow up question. My partner and I did the 8-week thing that we kind of turned into a 6.2 week thing. That said, I’m totally off the soft drink and Milo and that’s a big step for me. I was a 30-block full strength kind of guy and I’m not ashamed to admit it. I feel there’s a lot of judgment around soft drink consumption, if you’re struggling with it or embracing it I hear you. No one wants to admit they are a guzzler but all that black gold on the shelves of Coles and Woolies must be going somewhere! And Milo who knew that was full of sugar? I was devastated. In the play Kenny’s grappling to stay off heroin and crack, I’m substituting Coke and Milo.

You have enjoyed many television appearances since graduating from VCA in 2012. Is there a common theme amongst those guest roles?
Stalker, meth cook, shonky mechanic, convict, homeless man and facially disfigured returned soldier. You need it? I got it. I’ve spent a lot of time in make up trucks getting covered in grime. Getting a bit serious for a minute – I never judge a character. I’m interested in that person, what makes them tick and what, if anything, went wrong. Like Sharon says to Mary in Detroit -‘I’m as beautiful on the inside as you’. I love playing people up against it, putting myself in their shoes and understanding what in their lives has landed them where they are. Circumstances we are exposed to and choices we make are the only thing that separates us as people and I think that had I been exposed to the same circumstances and made the same choices I would absolutely be in the same place as the characters I play. I’m all about respect and empathy for people in a hard place. All that aside, I’m really chuffed to be playing the issue free romantic lead heartthrob in Detroit. Um…

How do you make your poached eggs taste “so special”?
Well the trick to poached eggs is a decent slug of vinegar in water that is bubbling but not boiling. That is, you want some small bubbles rising from the bottom, not a full hectic bubble fest on the surface. Create a whirlpool and ease your egg in from a small bowl. The slight movement in the water will better form your eggs and stop them sticking. Also have 50 cent playing in the background, it helps.

If you could have a Milo with anyone dead or alive, who would it be?
I met Vanilla Ice on a plane in 1986. Then in 1992 I went on Mimi McPherson’s (Elle’s sister) whale watching boat. I also saw Kevin Rudd having a coffee in Canberra once, we didn’t speak but I’m pretty sure he felt my presence. Anyway what I’m getting at is that the bar is set pretty high. I’m going to have to go with Jesus on this one though – they’re pretty sure he actually lived right? I’ve got a few questions for him and I’d love him to turn some water into Milo for me. Or John Snow, not the actor, like the actual John Snow. Wait, is he dead or alive?