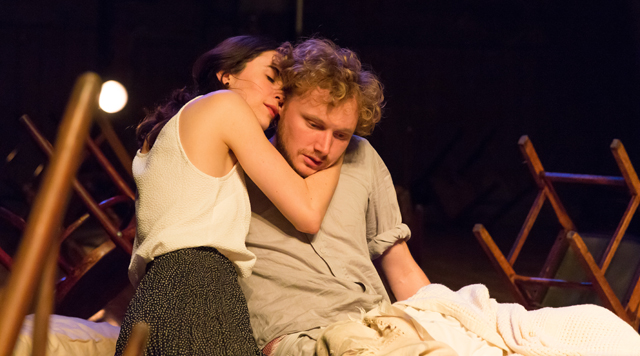 Theatre review
“Impoverished nobility, bored gentry, long afternoons, and a gun” is Anthony Skuse’s characterisation of Chekhov’s legacy, and in this new adaptation of Platonov, Skuse constructs a languid late nineteenth century Russian town, focusing on the title character’s love affairs, and the acquisition of an estate by the underclass. Skuse’s script contains several strong narratives with complex psychological and emotional dimensions, but the work is surprisingly comical, buoyed by a young cast who seems determined to keep proceedings light and frothy.

Skuse’s use of space is aesthetically outstanding. His stage design is minimal, but through the sensitive positioning of a generous number of chairs and actors, scenes come to life and we experience a sublime transformation of time and space. Lighting design by Chris Page and sound by Alistair Wallace are subtle but powerful in effecting atmosphere with a dramatic elegance. The innovative use of chorus and Russian folk songs further enhances the theatrical experience, and this is where most of the performers excel. Direction of performance timing and energy is executed well, but motivations tend to be surface, and it is this lack of gravity that tarnishes the production. Costume is not credited, and the cast often looks as though they are still in rehearsal garb, which detracts from the social and class structures that inform much of the play’s content.

Leading man Charlie Garber is charismatic, with an impressive presence, but his approach is persistently farcical, and he anchors the production in a frivolity that sits uncomfortably with Chekhov’s weighty themes. Platonov’s spinelessness can be humorous, but it is also a serious element that ultimately represents the core reason for the destruction of lives in the story. We may perceive the responsibility associated with the lack of courage and virtue in key personalities, but the show needs to deliver something more poignant in order for its audience to connect on a personal and emotional level. Sam Trotman as Sergei demonstrates a much stronger commitment to the role’s authenticity. His ascension from puerility to anguish over the course of the play is thoroughly compelling, and his fierce vitality adds a much needed edge to a production that tends to be too understated in its storytelling.

The show successfully removes conventional stylistic touches that could be thought of as clichéd in standard representations of Chekhov’s scripts, but the vacuity left behind in their absence is not sufficiently compensated by the show’s moderate sense of originality. Skuse wishes to expose the essence of these character’s very beings, to achieve an understanding of how we function as individuals and as societies, but the language required to communicate those concepts seem to ask for something more elaborate and substantial. It turns out that stripping something bare does not necessarily give easy access to the truth, and what we think of as cosmetic could actually hold significance and meaning.