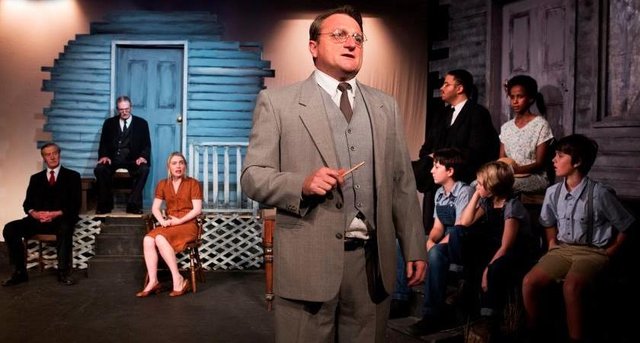 Theatre review
Harper Lee’s book was published in 1960, and has since become one of the most popular novels in modern times. Its central theme of social injustice remains poignant and the depiction of its characters’ courage to oppose them, is no less powerful half a century later. New Theatre’s staging is mindful of the story’s significances and director Annette Rowlison’s work pays reverence to our collective memory of To Kill A Mockingbird, whether in the form of book, film or theatre.

Rowlinson’s rendering of the American South in the 1930s has a charming and sentimental beauty. There is a joyfulness in watching children play outside, and neighbours going about their daily business on their porches and front lawns. The trio of child actors, led by Teagan Croft as Scout, bring magic to the stage with their undeniable talent, and Rowlinson’s ability to create chemistry between these vibrant children and their adult counterparts is central to the success of the show. In fact, the show only falters in the court scenes where the children are not in prominence.

Atticus Finch is played by Lynden Jones with great integrity. The subtlety in his performance is an intelligent choice for a character that audiences know so well. There is no need to explain who Atticus is. He takes into account our familiarity, and saves his dramatics only for a handful of emotional scenes. Jones’ most heightened moment happens in the courtroom, and his powerful delivery rescues that scene from being otherwise slightly low on energy.

The support cast is uniformly strong. In fact all actors bring something special and each have memorable moments in the production. Katy Avery as Mayella Ewell transforms her simple role into a riveting one, and the intensity at which she attacks her part is a highlight. Claudette Clarke’s Calpurina is grounded and tender. She has a relaxed confidence that is very enjoyable. Sarah Carroll plays Maudie Atkinson, who is the Finchs’ neighbour and our narrator. She brings an air of upbeat optimism that is comforting, and also provides an effective voice of reason that is a crucial mechanism of the plot.

Boo Radley’s appearance towards the conclusion can be tricky to handle, but Rowlinsons’ artistic sensitivity shines through and the scene is a triumph. A moving crescendo is delivered, and the moral of the tale is brought home. It is impossible to not love To Kill A Mockingbird. We have all experienced ostracism, and we have all witnessed discrimination. Boo Radley lives in all of us, and to see him materialise and lovingly depicted on stage, is profound.